Prank gone wrong: 18-year-old nearly has his hand chopped off after friends woke him up with chainsaw 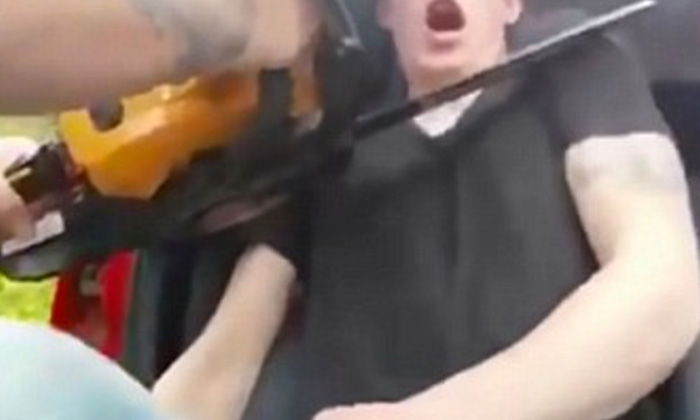 An 18-year-old guy in Germany nearly had his hand chopped off after his friends were inspired by a viral video to wake him up by starting a chainsaw.

The victim had been celebrating the Christmas holidays with four friends aged between 15 and 22 in the town of Wickede in North Rhine-Westphalia, Germany, Distractify via Daily Mail reports.

The teenager fell asleep on the sofa, and in the early hours of the morning, one of his friends decided to play a joke by bringing a chainsaw into the house to re-enact a viral video they had seen on the internet.

The friend said he switched on the chain brake, started the chainsaw and woke up the 18-year-old, who then leapt into the air and tried to push it away, injuring his hand.

He was rushed to hospital by ambulance for emergency surgery.

"(The victim) was so frightened that he tried to push the blade away, and was badly injured in his left hand.

"The 22-year-old told us that he was sure he had switched on the chain brake. But the chain had turned."

The police spokesman said that even if no one intended to injure the teenager, there is likely to be a court case in which the 22-year-old will be charged with inflicting dangerous bodily injury.

A blood alcohol test revealed that the 22-year-old had not been drinking, and a video of the incident which one of the teenagers filmed was kept by the police.

The victim and his friends were not named in reports.

The viral video they were copying features a Norwegian man who uses a chainsaw to wake up his friend who had fallen asleep in a car.

In the video, he has taken safety measures, such as taking off the chain from the chainsaw, and starts the powerful tool, lunging it towards his friend's neck.

The man then pushes the chainsaw away and dashes from his seat as his friend laughs.

Related Stories
Woman pranks boyfriend into thinking she has been brutally murdered
Man pranks his grandma with wacky magic tricks -- and her reactions are priceless
Oh no she did not! Girl pranks boyfriend with shaved eyebrows -- and he flips out
prank
scary
creepy
Youths behaving badly
youths