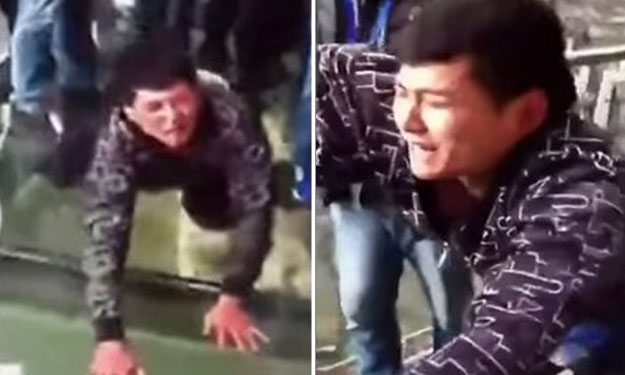 If you have a fear of heights, it's probably best that you don't even try to walk on the glass trail at Tianmen Mountain in Zhangjiajie, China.

A video on LiveLeak shows the terrified dude wailing and on his knees, as he shut his eyes and tried to feel his way along the path.

The glass walkway, which is slightly less than a meter wide and about 6cm thick, stands over 1,400m above sea level -- definitely not a trail for the faint-hearted.

In the clip, the guy can be seen suffering a meltdown. He hysterically yells, "Move away! Move away!" to a girl who tried to hold him.

His comrades are not helpful either, as they stand around laughing at his breakdown.

Finally, with a lot of resistance, someone pulls him to his feet. A girl asks, "Do you trust me?"

He pitifully says "yes" as he allows himself to be led by her.

This is actually not the first time someone has found themselves unable to continue on the daredevil trail.

Last year, a guy also went viral after he had cold feet while on the walkway and had to be dragged by his girlfriend.