Police in China arm themselves with weapons to subdue 'ferocious tiger' 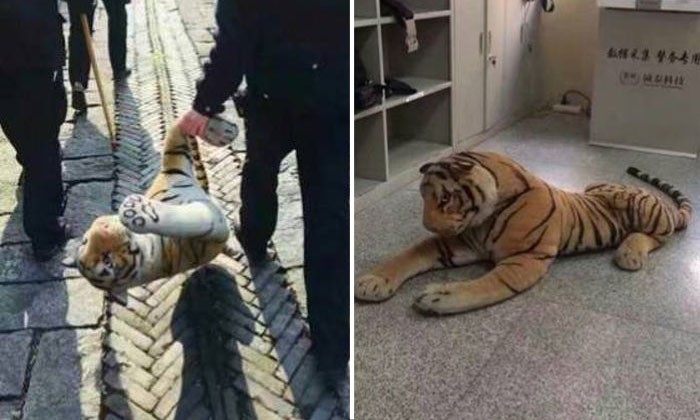 Chinese police were dispatched to a park in Zhejiang, China equipped with weapons like guns and long poles on Thur (Feb 9) afternoon due to reports of a tiger being spotted roaming inside the park.

However, their readiness for battle was not necessary.

The special police unit arrived at Huaguoshan park in Changxing country and was informed about the huge size of the ferocious beast which locals had noticed lurking up in the woods.

According to Shanghaiist, the sight of the terrifying creature had "frightened them to death."

A timid man was questioned by the police if he wanted to show them where they saw the tiger said, "My blood pressure is too high."

A video shows police carefully walking towards a path and spotting a "tiger" resting inside a pagoda.

They casually walk up to it and erupted into laughter because the 'terrifying beast' was in fact just a cuddly stuffed animal.

However, to not take any chances, the police brought the toy back to the police station with them.

It is not clear who the "tiger" belongs to.

After a man was killed by a tiger last month after he accidentally jumped into a tiger enclosure while attempting to avoid paying for an entrance ticket at a Ningbo zoo, everyone has gotten their guards up.

Related Stories
These extremely chubby tigers may have had a little too much to eat during CNY at Chinese tiger park
World's bravest duck trolls tiger -- and lives to tell the tale
Horrific discovery at Thailand's Tiger Temple: At least 40 dead cubs found in freezer
China
tiger
toy
China police
fail
epic fail
spotted 'tiger' at park not that scary after all