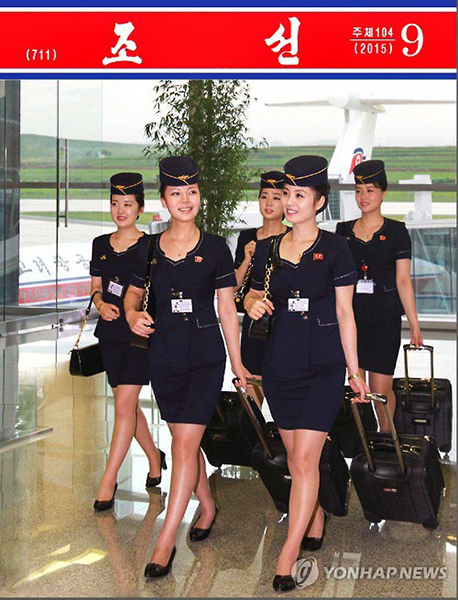 The flight attendants are walking with their luggage, attired in navy blue uniforms, a change from the red uniforms worn in 2013, and wearing a badge on the left side of the chest featuring Kim Il-sung and Kim Jong-il.

An aircraft from Koryo Air can be seen in the background. With their beautiful smiles, and wearing short skirts, black shoes, sophisticated makeup, necklaces, and other accessories, the flight attendants do not look any different from attendants of other airlines.

The change in the eye-catching and elegant appearance of the flight attendants is an effort by Kim Jong-un’s regime to stimulate tourism by improving the quality of airline service, report Yonhap News and koreaBANG.

In July 2012, while inspecting the Pyongyang Sunan International Airport, the first chairman of Kim Jong-un’s National Defense Committee gave orders “to change flight attendant uniforms to match the demands for a more modern attire and to improve service for the in-flight meals.”

The “Joseon” magazine propogates, “From all sides, the Pyongyang Sunan International Airport perfectly captures the monumental creations of the Songun times.”

But the ratings given to the North Korean airline are consistently very low.

The England research institute Skytrax evaluates 600 airlines worldwide on criteria such as plane deterioration, boarding amenities, on-board service and in-flight meals, and gave Koryo Air the lowest grade of 1-star out of a maximum possible 5 stars.

They explained, Koryo Air is the only airline to have received a 1-star rating, as “for each criterion evaluated, it was the worst airline.”