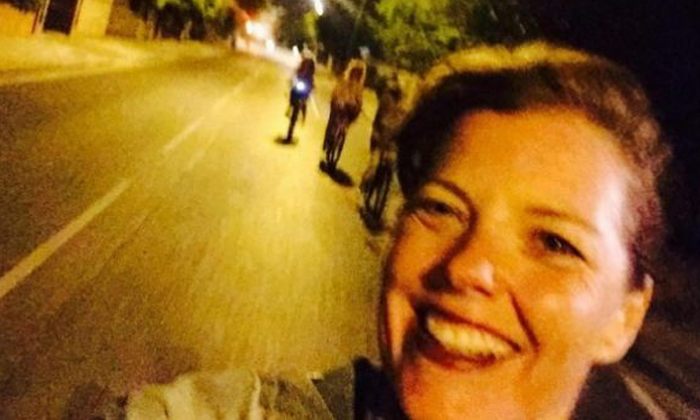 After celebrating her mother’s birthday at a pub, with her phone in one hand, and her other on the handlebars, Carmen rode her bicycle and captured the ride in a blurry selfie.

Her mother, Sherry Bennett, watched from behind as Carmen hit an uneven part of the road, flew off the bike and cracked her skull on the road. They were less than 100 metres away from home.

According to The Age, Carmen’s husband, Rufus Greenway said it was an unfortunate accident that could have been prevented.

"It's unfortunately an unfortunate accident. If she was wearing a helmet she would still be alive.”

"It was just a gross oversight, maybe overconfidence."

"The biggest loss is my children have lost their mother at 41. I've lost the love of my life. No rows, no arguments, I thought I was in it for 60 years," Rufus Greenway said.

"We were just living an adventurous life together and it was getting better every day. The sanctity of life was being in each other's arms."

The couple were married for 13 years and had two sons, 13-year-old Finlay and Rafferty, 4.

Mr Greenway then explained that Carmen, an experienced cyclist, would frequently take selfies whilst riding.

"She had been taking some selfies on the main road, she did that regularly and was media savvy. She was not taking it at the moment of the accident. She was 100m from our house, one hand on the bars, quite relaxed, and probably had had a drink.”

"She cycled that way every weekend and perhaps it's familiarity breeding contempt. She was just having a lovely time, happy to be with her mother for her mum's birthday. One second you're happy and then next second it's a trainwreck.”

There is no legal law to wear a helmet while cycling in the UK.

"I'm struggling, struggling with the sadness and the broken heart.”

"Carmen and I and her two girlfriends got into our party dresses and got on our bikes ... we just cycled very close, just down the road to a restaurant that was a favourite of ours."

The whole family was in shock, Bennett said.

The funeral for Carmen Greenway was held last month.