Netizens puzzled over bizarre photos of Jay Chou -- and his lengthy legs? 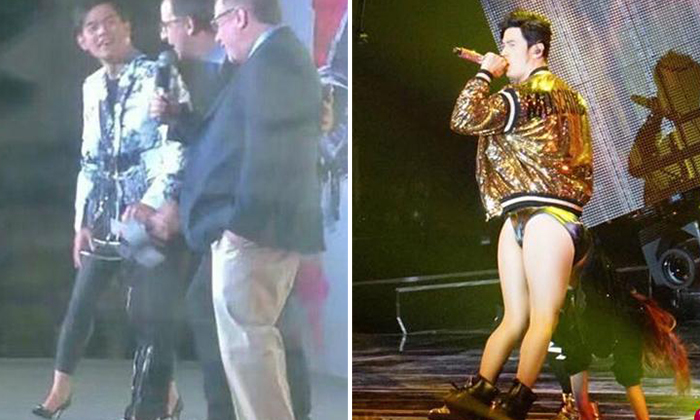 A photo of Jay Chou and his ‘beautiful legs’ has been circulating online recently, leaving many bewildered netizens and fans in stitches.

The photo was taken during Jay's London concert and apprently, when the photo was captured, a dancer had bent over, creating an optical illusion that her legs belonged to the superstar, reports Shin Min Daily News via Lianhe Zaobao.

Other fans have also contributed other similar photos of Jay captured in awkward positioning, including pictures of him seemingly in heels, or sporting a pony tail.

Jay himself also noticed the photos, and reportedly had a blast laughing over them.

Said the singer jokingly in his Facebook page after his concert in London:

“Thank you for all your support and passion.

“Here’s another photo which a fan had stitched together for me, it’s hilarious!”

Take a look at the photos, as well as other photos of Jay Chou, his wife, Hannah Quinlivan and their daughter in the gallery below.