Mum gives daughter an epic scolding for cropping her out of family photo: 'Stupid idiot' 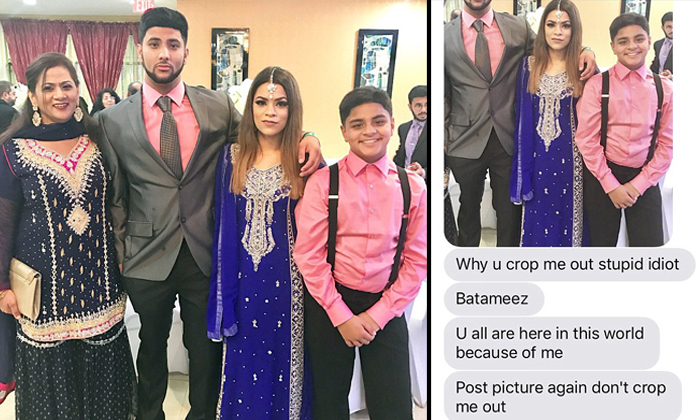 Most people probably would not take too kindly to being the only one cropped out of a group photo, but this mother's reaction really took the cake.

Abeera Tariq, 18, had attended a cousin's wedding, but did not manage to get a picture alone with her two brothers.

Her solution was to crop her mother out of a group photo that the four of them had posed for, before posting it on Facebook.

Tariq's mother, Noreen, saw the post and let's just say, she was not pleased.

She took a screenshot and texted an indignant rant to Tariq, which said (after translation):

"Why u crop me out stupid idiot".

"U all are here in this world because of me".

"Ungrateful kids… I gave birth to you with such difficulty and you repay me by cropping me out."

Tariq subsequently tweeted about the incident and has garnered amused reactions from netizens.

Browse the gallery to view the full conversation and netizens's comments.