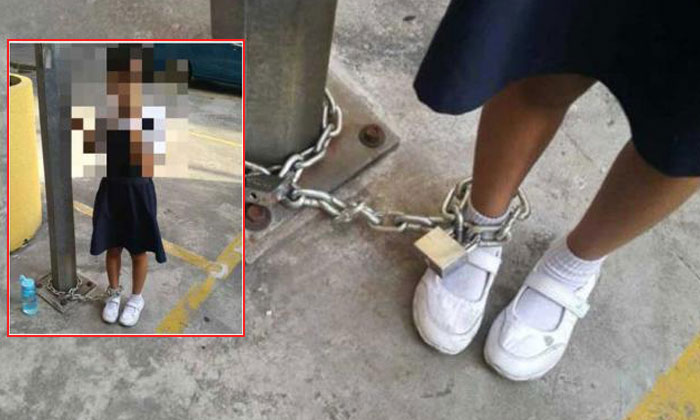 A photo showing the leg of a primary school student chained to a lamppost at an apartment building went viral last Friday (Oct 28), prompting many Malaysians to take to social media to voice their outrage.

The mother and her eight-year-old daughter were then brought to the Subang Jaya district police headquarters for questioning.

She has recently admitted to chaining her daughter to a lamppost at their block for misbehaving, and is now seeking forgiveness from the public for her actions.

"I admit I chained my daughter to the pole. Every time after school she doesn't come home so we have to go around looking for her. This has happened more than three times," said the woman known as Lavanitha in a video.

In the video that was posted on Facebook by Siddhartha Kubason, Lavanitha appealed to the public and social media users to not further exploit the issue.

According to a report by The Star, she said everyone complained about the serious disciplinary issues of her daughter, from the school she went to, and even the tuition centre.

"Even the lady that provided transport services for her complained that she was very stubborn. So I had no other choice, I have even locked her up at home," said Lavanitha.

Her daughter would be well-behaved for three to four months but the problems would recur thereafter.

"I thought publicly punishing her would be an effective method as she might be ashamed of her actions," Lavanitha said, adding that she had no intentions of abusing her child.

She also feels that the speculation on social media has blown the matter out of proportion, and has also affected the relationship between her and her daughter.

"It is supposed to be a small family matter but now everyone has misunderstood the issue and are talking about it, affecting the relationship between my daughter and me. To make matters worse, government officials are coming to investigate," she said.

Lavanitha was upset that he daughter was kept away from her when she was on bail, and blames the third party who interfered for causing this.

"I admit my mistake and I apologise. Please do not exploit the issue further," she said.