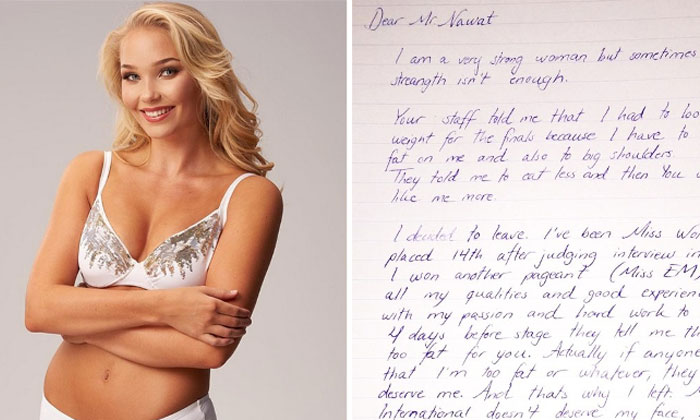 20-year-old Arna Ýr Jónsdóttir, the current Miss Iceland, decided to quite the Miss Grand International beauty pageant in Las Vegas after being allegedly told by a staff member to lose weight before the finals, reported Distractify.

A member of the Icelandic national athletics team, Jónsdóttir revealed that she's often told to lose weight because of her athletic body type and wide shoulders.

But she certainly must have been pissed off this time because the beauty queen decided to post an open letter of resignation addressed to the organisers on her Instagram.

"I am a very strong woman, but sometimes my strength isn't enough."

"Your staff told me that I had to lose weight for the finals because I have too much fat on me and also too big shoulders. They told me to lose weight and you would like me more."

"I decided to leave. I've been Miss World Iceland, placed 14th after judging interview in Miss World, I won another pageant (Miss EM) and with all my qualities and good experience I come with my passion and hard work to your pageant. Four days before stage they tell  me that I'm too fat for you."

"Actually if anyone tells me that I'm too fat or whatever, they just don't deserve me. And that's why I left. Miss Grand International doesn't deserve my face, body, personality or heart."

"I truly hope that the organisation opens their eyes because the year is 2016 and if you are gonna hold an international pageant, you have to see the international beauty."

"In my country, my body shape is perfect. And that's what I'm gonna remember. No one will ever tell me anything else."

And it's heartwarming to know that netizens were supportive of her decision.

"You are beautiful just the way you are," one wrote. "Thanks for setting such an example for young girls, I wish you all the best," said one commenter.

"You are right!" another commented. "You are a model for each woman in this world. Keep going on like that. We are with you!"

The winner of the pageant was announced just yesterday, and here's Arna's recent Instagram post showing some love to her friend's big win!