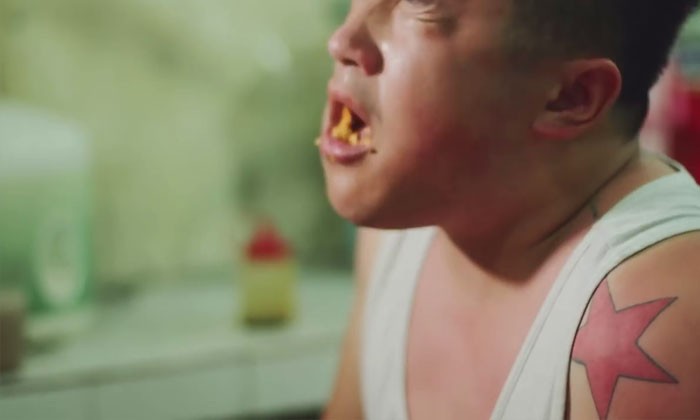 Singaporeans have a penchant for spicy food, but can we handle Indonesia's "Death Noodles"?

Ben Sumadiwiria, a young chef from London, put his tolerance to the test and downed a plate of "mie pedas mampus" from a street stall called Warung Abang Adek in Jakarta.

The stall is infamous for selling what many claim to be the spiciest noodles in the world. The dish is prepared using birds eye chili which packs a spiciness rating of 200,000 Scoville units each.

The 22-year-old was in Indonesia's capital city to visit relatives as well as film a web series Lost in Jakarta. But as it turns out, none of his Indonesian heritage helped him get through the whole plate.

Sumadiwiria takes us through his fiery ordeal in a video he posted on his YouTube channel Awesome Eats.

At first, he bravely wolfed down large helpings with his chopsticks. But by the third scoop, he had to remove his outer shirt.

The heat was definitely on. It didn't help that his local companion, who only ordered a bowl with 50 bird's eye chilis, started a running commentary on how he found his own plate too spicy to finish.

However, Sumadiwiria ploughed on and continued to swallow the noodles from hell.

At this point, he was sweating profusely and no amount of milkshakes or frozen bananas could bring the heat down.

He only cooled down after dunking his entire head in cold water.

Others who rose to the challenge ended up vomitting their noodles into the drain.

While there have not been any health advisories issued against the stall to date, consuming too much spicy food can harm the stomach lining and digestive tract.

Sumadiwiria, who is used to eating extreme foods around the world, said he wouldn't wish the pain on anyone else in the world.

But not all find the super spicy dish unbearable. Some locals can down the entire plate with no issue at all!

Do you dare to take on the challenge?

Related Stories
First Rattata, now Caterpie: Diner feels like vomiting after finding 'centipede' in fish soup
Video of baby being so excited over food will make you grin with happiness
More About:
funny
food
spicy
fire