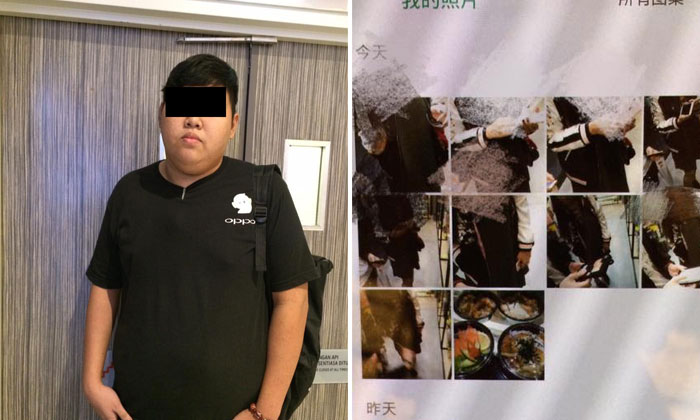 It is finally your day off after a rough week at work and you cannot wait to spend it with your loved one...but little do you find out out that you have to deal with a pervert trying to take pictures of your girlfriend instead.

Well this was the case for Calvin Yong. And of course sparing the pervert was not on his list of options. In fact he took to Facebook to rant about his encounter with photos of the pervert attached, and boy did it go viral.

Calvin was at KL's Sunway Velocity with his girlfriend on Monday (Dec 26) at around 10.15pm looking for phone cases at store located on the third floor.

And as they were browsing the store, a male staff walked over to assist them. But Calvin found it weird that his phone was held up with the camera facing straight at his girlfriend. Who does that?

Calvin had a strong feeling that the male staff was secretly snapping photos of his girl so he waited for him to close the shop, and then followed him.

Having noticed that he was being followed, the male staff tried to run away, but Calvin called out to him and demanded to take a look at his phone's gallery.

"There were multiple photos of my girlfriend, focusing on her chest!

"I snatched his phone before he could delete it and brought it to the authorities, including the police officer.

"We went through his phone and found similar photos of other girls, aiming at their chests.

"The police officer then asked if we wanted to file a report against him but we decided to just report him to the management.

"We formatted his phone, took photos of him as well as the evidence, and left him to the authorities.

Towards the end of the post, Calvin thanked the management of the mall as well as the police officer in charge "for being patient and helpful" to them.

He also urges all females to be wary of this man and to always stay alert of their surroundings.

A big thank you to the management and the police officer in charge for being so patient and helpful to us. Please share and inform your female friends around you to be careful of this man and always stay alert of your surroundings.

Related Stories
"I want to touch your private part," says Malaysian security guard to pregnant woman, gets beaten up by her husband
Malaysian women as young as 14 livestream videos of themselves undressing for money
Pervert gropes woman on crowded bus in Turkey -- and gets beaten by all ladies on board
pervert
molest
girlfriend
boyfriend
sexual abuse
Malaysia
KL