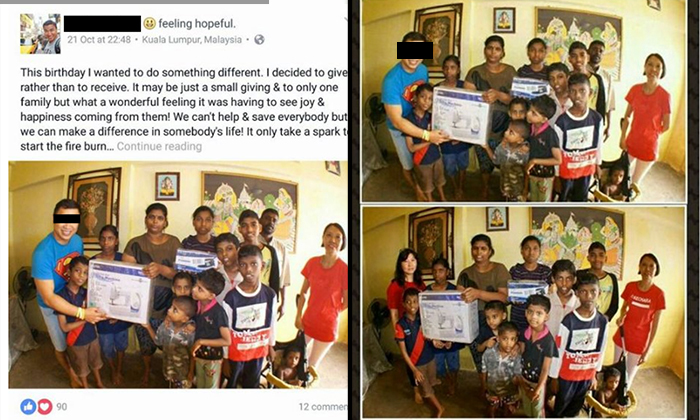 A Malaysian man has come under fire for doctoring photos to make it appear that he was doing charity work.

Posted by worldofbuzz, the man boasted about the good deeds for Kechara, a renowned charity, on his birthday.

His Facebook post read: “This birthday I wanted to do something different. I decided to give rather than to receive. It may just be a small giving & to only one family but what a wonderful feeling it was having to see joy & happiness coming from them!”

“We can’t help & save everybody but we can make a difference in somebody’s life! It only takes a spark to start the fire burning!”

However, according to Facebook user Madhu Sevan the man was only the driver and not the donor as he had claimed.

The original photo shows he edited out a woman in a red t-shirt to make space for himself in the picture.

Sevan said: "If you can see the lady on the extreme right..she was actually wearing a Kechara t- shirt..but he already edited the baju making it look like a plain red t- shirt."

Netizens slammed the man, who vigilantly deleted any comments pointing out his lies.

One user said: "Karma will come around anyway".