Man donates liver to woman who had only 50% survival chance without transplant, ends up marrying her 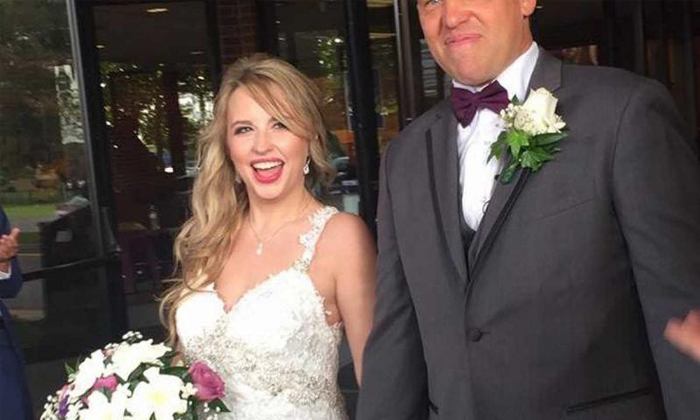 Mr Christopher Dempsey's donation of half his liver to a complete stranger has proved to be life-changing in more ways than one.

The former marine did not expect that he would be saving the life of the woman who would eventually become his wife.

Less than two years after Mr Dempsey called Ms Heather Krueger to reveal he was a match, the couple got married this month, according to a BBC report.

Ms Krueger had stage four liver disease for about two years when doctors told her in early 2015 that she only had a 50 per cent chance of surviving another two months without a transplant.

It was a race against time to find a suitable donor - a task made more improbable as more than 119,000 people were on transplant waiting lists in the United States.

This is where Mr Dempsey stepped in.

The love story began with an overheard conversation in a workplace break room in Frankfort, a village south of Chicago, Illinois.

Mr Dempsey, a code enforcement officer, told the BBC: "I heard a co-worker talking about his cousin who needed a liver transplant."

"I just thought to myself, I would want someone to help me or my family in that situation."

Mr Dempsey, now 38, decided to get himself tested.

Amazingly, he discovered his liver was a match for Ms Krueger.

Ms Krueger, 27, first spoke to him when he called her at the start of February 2015 to say that he would be her donor.

She would later tell Mr Dempsey how she and her mother had cried tears of joy following the call.

Mr Dempsey and Ms Krueger met shortly afterwards when he took her for lunch and paid for the meal.

They spent more time together as Mr Dempsey and his motorcycle club started fundraising for the procedure.

"We were going out looking for donations for a benefit, and I just started thinking, she's a really nice girl, she is somebody I would like to get to know," he said to the BBC.

The couple had already been on a couple of dates by the day of the surgery at the University of Illinois Hospital on March 16, 2015. However, they only made their relationship official afterwards.

"I was really confident everything was going to be okay," said Mr Dempsey. "I was still nervous - there is always the chance (something might go wrong) - but at no point did I rethink the decision.

"It was just really good knowing she was going to be okay."

Eight months after the procedure, Mr Dempsey proposed after a horse and carriage ride in Chicago. Almost 19 months from the day of the transplant, the healthy coupled wedded earlier this month.

"I think it was definitely more emotional - maybe more so for her and her parents - knowing what we had both been through," said Mr Dempsey.

"I never would have thought in a million years when I agreed to all this that I would marry her. It is amazing."

Related Stories
S'pore man proposes to GF -- by offering her his kidney: 'I thought he was joking'
Netizens hearts melt after photos of elderly man giving his wife piggyback ride across road in China go viral
Guys can learn something from this gentleman who ties his GF's shoelaces
Woman finds ex-BF's 90 touching love letters only after breaking up -- but it's too late
romantic
couple
love
heartwarming
touching
man donates liver to woman and marries her