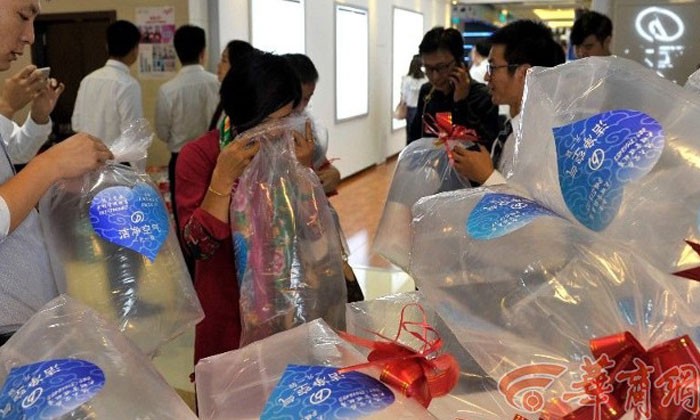 According to Shanghaiist, bags of fresh air were going on sale at a mall in Xi’an for 1RMB, on Monday (Sep 26).

No one is sure of the source of the “fresh air” at the moment, but one thing’s for sure, it definitely comes from a place with better air quality than Xi’an.

Xi’an is one of the many large cities in China that is known to suffer from chronic smog problems especially during winter.

The PM2.5 in the Xi’an air was at 65 micrograms per cubic meter that day. Though it’s above the WHO safety standard of 25 micrograms, it was still labelled as “moderate” air pollution by China, reported Tencent.

Unfortunately, this is not a great piece of news for residents. A recent study found that inhaling China’s smog could shorten one’s life expectancy by at least 25 months, while another study found that over four million Chinese residents had been diagnosed with cancer in 2015, and another three million had died from it.

Cancer has been the leading cause of death in China ever since 2010, with the highest number of deaths coming from lung cancer.

And what better way to make money than to benefit from the alarming health trend:selling clean air from Canada and Australia (at premium prices) to desperate residents fighting to remain in the best of health.

However, this Xi’an shopping mall took a different approach.

Instead of inflating their prices, they sold the bags of fresh air at a very low price, in efforts to draw attention to protecting the environment and the air they breathed.

Related Stories
Parents brave the haze at Bishan CC for up to 2 hours to grab toys for their beloved children
The haze is back in Singapore as PSI levels reach unhealthy range
What would you do with $700 million? Singapore spent it on the haze
More About:
pollution
nature
cancer
haze
China
death