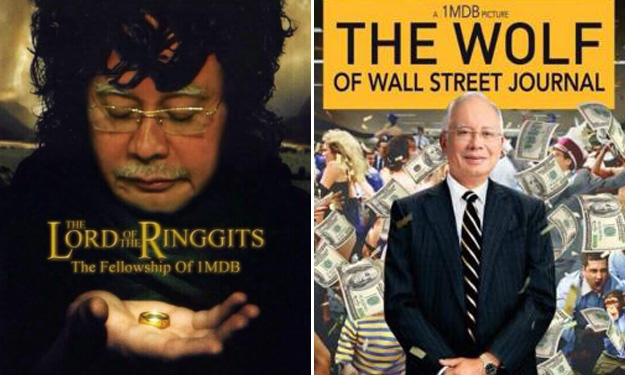 The reply from the former deputy premier Anwar Ibrahim: "Can, bro. Even the mattress is thicker now."

Short on facts in the country's hottest political scandal in years, some Malaysians are using dark humour and conspiracy theories to fill in the gaps.

The sensational claims are the hottest since the run-up to the 2008 general election, when former premier Mahathir Mohamad began attacking his successor Abdullah Badawi.

One Whatsapp message going around this week has a list of new movies linked to the scandal.

The titles include Saving Private Funds, Indiana Jho - Raiders of The Lost Funds, and The Silence of the PM.

"Jho" refers to businessman Low Taek Jho whose name has been often linked to debt-laden 1MDB though he has repeatedly denied any role in the state investment fund.

In the list are also several movie titles tied to the ringgit, widely referred to as RM in Malaysia. The Malaysian currency is trading near record lows against the US dollar and the Singapore dollar.

Among them: Honey, I Shrunk The Ringgit; Lord of the Ringgits: The Return of Dr M; and Crouching PM, Hidden RM.

The Internet meme is often used as political satire in Malaysia, with several wildly popular ones going around last year when Datuk Seri Najib used the humble kangkung vegetable to talk about inflation.

PM Najib has accused Dr Mahathir, his most strident critic, of working with "foreign nationals" to topple him.

Reports about the scandal are now widely reported in Malaysian and international media. Indeed, there is a concern among Malaysian officials that the Prime Minister is facing a trial by media and has already been judged guilty.

"What's being waged is a war of perception where the truth is irrelevant," said an aide to PM Najib.

The rise of social media in recent years has had governments around the world scrambling to ensure that budding scandals and rumours are quickly nipped in the bud with official answers.

With the investigations expected to take weeks if not months, impatient conspiracy theories have begun to surface.

One has it that the gunning down of AmBank founder Hussain Ahmad Najadi in July 2013 is linked to the 1MDB case.

On Tuesday, veteran opposition politician Lim Kit Siang tried to link his killing to the scandal, after a Whatsapp claim on this went viral.

The police chief's reply: "Hussain's case has been solved with the killer already detained. End of story."