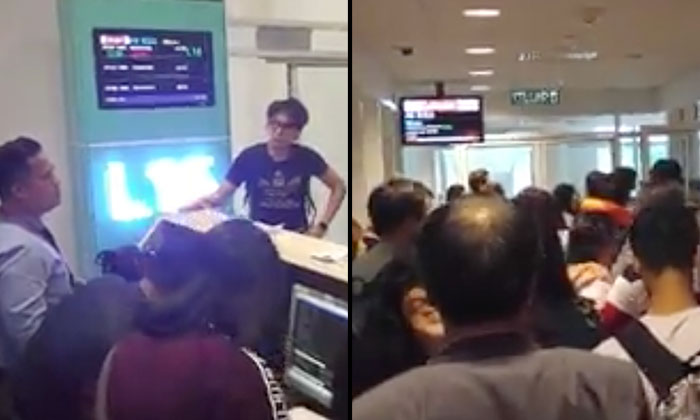 An angry Malaysian man, Lai Keen Yang took to his Facebook page on Feb 7 to complain about the terrible service he had received from a budget airline company after his flight from Kuala Lumpur to Macau was postponed six times and delayed by more than seven hours in total.

On his FB post, Lai gave a detailed account on the series of delays and incidents that happened on the day of his flight, which spanned from 10.50am to 6.30pm.

10.10am : Gate L22 open, everybody checked in, and were told to wait in holding lounge.

10.55am : Announced that the flights had been rescheduled again to 12.30pm, and the gate was changed (last minutes announcement). Still, many ppl with earphones in ear did not know whats going on. No service crew attended to us at all.

11.45am: After i stepped to ask questions, the crew said: ‘There was a technical error. We still aren’t sure which gate it will be, but it is not this gate (L22).

12:15pm: No announcement regarding the latest news until i asked one of the crew.

They announced that we would be using two planes, one for the passengers and another for the luggage.

12:55pm: After checking in again, we were assigned new seat numbers. Had to wait again in "new holding lounge" at Gate L16. However, there was no plane in sight.

1.15pm: Still, there were no announcements for flight delay.

2.10pm:  Still no airplane! We were told that the flight has been rescheduled (again) to 4:00pm

4.45pm: Everyone were seated in the analogue passenger logging, two crew using pen to mark each name before boarding, spent more than 30 minutes just able to get about 30 passengers seated, until a few of passengers started to make noise, breaking the line to barge in.

4.45pm: It was so hot and stuffy inside the passenger logging, as the aircon was crappy and there were just too many people.  Passenger starting  to sweat, and the children cant stand anymore.

5.15pm: Finally boarded the plane, and most of the passengers boarded too.

5.30pm: Everyone is ready but still, the luggage door below the plane was open. (saw from my windows)

6.15pm: After all luggage has been moved, the plane was ready to take off.

10.15pm: After customs clearance, everyone had to wait again for their luggage which was originally on the same plane, but somehow moved to another plane instead.

Aside from the delays, Lai was dissatisfied with the way staff dealt with the situation, citing pointers such as the last minute announcements for the delays, and the unavailability of food and water for a long time, reports World of Buzz.

Lai uploaded several videos of the volatile atmosphere in the lounge as passengers confronted airline staff.

Netizens who read Lai’s story had mixed reactions to it, with some feeling that Lai should not be ‘so demanding’ as this was a budget flight, while others felt that company should have dealt with the situation better.

Watch videos of the incident below.

Related Stories
Singaporean mother made to squeeze her breast in order to prove she was lactating by German police at airport
Jetstar plane bound for Phuket turns back to Singapore due to 'technical issue'
Citilink pilot fired after allegedly showing up drunk for flight in Indonesia: Video shows him stumbling and dropping things
Malaysian airline
complaint
angry
bad service