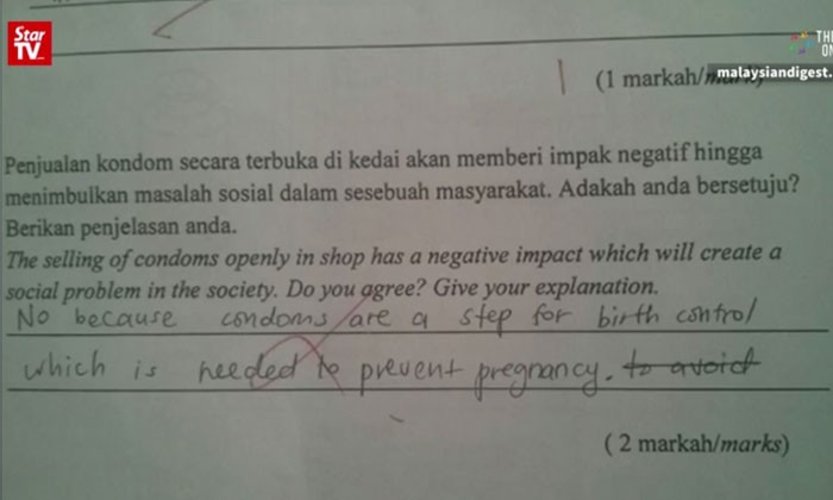 A condom-related question in a Malaysian Form Three (Secondary Three) trial exam has got netizens worked up.

The question for a science exam read:

"The open sales of condom will bring negative impact to the extent of causing social problems. Do you agree? Please explain."

"No. Condoms are a step for birth control which is needed to prevent pregnancy."

The point of controversy was that the examiner deemed this answer, which carried two marks, to be "wrong".

"Let's investigate and see what the problem is. Something is wrong somewhere as condoms are used to prevent pregnancies."

The Star reported that former director-general of the National Population and Family Development Board Datuk Dr Raj Karim said it was erroneous to mark the answer as wrong.

"We always say that we have to teach sex education or family life education in school and for children to remain safe and have a healthy lifestyle.

"It doesn't mean when you teach them about family planning, you're asking them to practise it there and then."

"Although sex education is available and taught during Biology classes, students are not taught the ‘hard facts'.
"The teachers are either shy to talk about it, don't want to talk about it, or just ask students to read it themselves."

One parent, Mr Goh Seng Chui said the examiner was being unfair:

"Opinion questions do not have fixed answers which teachers are used to.

"I feel that the problem lies with the narrow mindedness of the teacher, not the question or how the student replied."