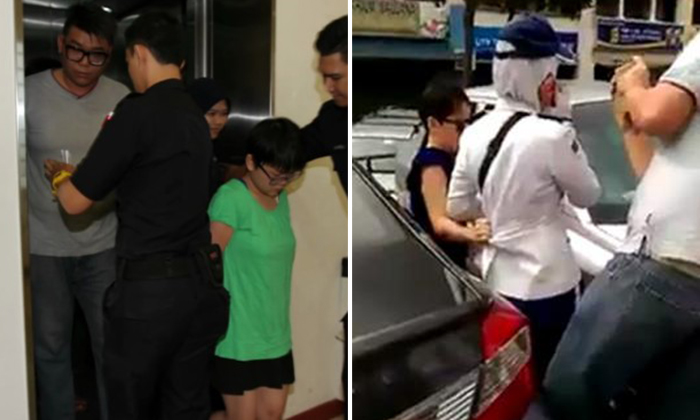 A couple captured on video harassing a council officer for issuing them a parking summons have been jailed 14 days and fined RM3,000 (S$ 958) each.

They were charged under Section 353 of the Penal Code for using criminal force to deter a public servant from discharge of his duty.

This carries a jail term of up to two years or a fine, or both, upon conviction.

Magistrate P. Sarulatha also ordered Lor and Tan, who are both business owners, to pay a fine of RM3,000 each, in default seven days' jail.

The court allowed a stay of execution pending an appeal and the couple was granted bail at RM2,000 each.

According to the charge, the couple had used criminal force against Nurul Ain who was on duty.

In the two-minute video which went viral, the MPSA officer was seen "trapped" as the couple prevented her from leaving the scene.

A woman in spectacles kept tugging on her uniform while a man obstructed her path.

The MBSA officer was also seen calling for help from her counterpart.

In a related development, MBSA said it was grateful for the concern shown by Malaysians.

Its corporate communications head Shahrin Ahmad said that enforcement officers on their rounds had to face such situa­tions often.

"This, however, will not stop us from carrying out our duty. We are glad we received tremendous support from netizens," he said.

He also thanked the police for their swift action in apprehending the couple.