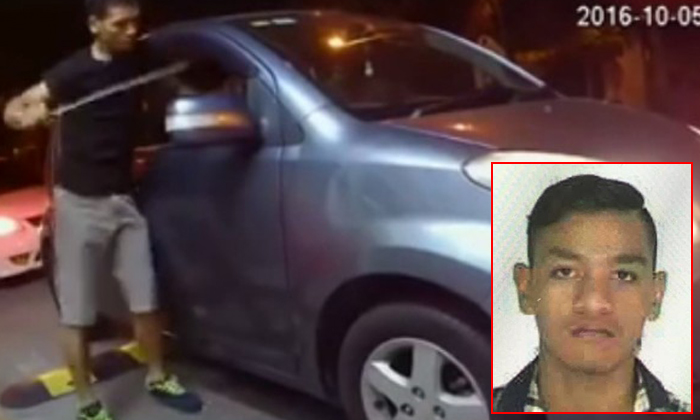 A teenager was caught on video engaging in a brazen armed robbery in Ara Damansara, Malaysia.

According to The Star, Muhammad Nur Aman Ibrahim, 17, is currently being sought by police to help in the investigations.

"Those with information on his whereabouts are also urged to contact the nearest police station," Malaysian authorities said at a press conference Thursday (Oct 6).

Two video clips of two women allegedly being mugged by an armed robber have been circulating on social media.

The clips had a date and time stamp showing that the incident occurred at 3.40am on Wednesday (Oct 5).

One video clip shows the MyVi attempting to enter an area guarded by a boom gate when the white car pulls up and stops directly behind it.

A man in a black T-shirt and grey shorts exits the white car brandishing a long parang.

In the shorter clip, taken from a higher angle, the attacker is seen running towards what is believed to be a passenger in the blue car who had stepped out of the vehicle.

The attacker can be seen trying to slash at the woman's hand to take her bag.

The suspect took a handbag, a mobile phone and RM1,000 (about S$330) before fleeing the scene.

Police said at 5.30pm the same day, a patrol team in Desa Ria spotted the vehicle used in the robbery.

"Our men ordered the driver to pull over but he rammed into a car in front of him before reversing and hitting the patrol vehicle.

"The driver then sped off," a spokesperson said.

A 2km chase ensued and ended in Desa Mentari.

"During the chase, the driver grazed the right side of our vehicle in a bid to escape, so we had to open fire.

"Five shots were fired and a few hit the suspect's car. That prompted the driver to pull over and flee on foot," he said, adding that it is uncertain how many suspects were in the car as it was heavily tinted."

ACP Mohd Zani said checks by police found that the car was reported stolen from a 25-year-old Customs Department officer during a robbery in Jalan SS4B/10 on Sept 23.

Nine packets of a substance believed to be heroin were also found in the car.

The case is being investigated for armed gang robbery, attempted murder and drug possession.