Look at the huge crowds that turned up for Bersih 5 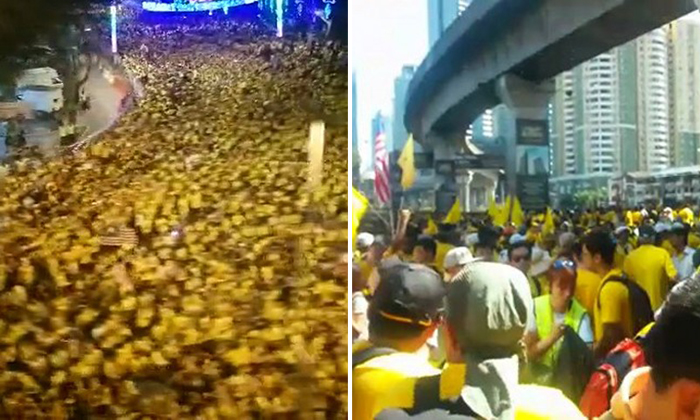 Stomper Daniel alerted Stomp to photos and videos of the immense crowds that turned up for the Bersih 5 protests in Malaysia.

The clips show thousands of Yellow Shirts, the protesters against PM Najib Razak and his government, gathering on the streets

The rally ended after culminating in a large gathering in front of the Petronas Twin Towers in KLCC, reports The Star.

After a final round of speeches by Opposition politicians and activists that lasted a little over two hours, organisers called a halt to the rally at around 5.45pm.

The rally ended with the singing of the national anthem, 'Negaraku'.

By that time, a downpour had started, leaving many scrambling to find shelter while others were seen with raincoats and umbrellas.

A large number of demonstrators also sought shelter at the Suria KLCC Mall, and continued chants of "Bersih, Bersih" in the shopping complex, much to the amusement of shoppers.

The rally, which began at various gathering points across Kuala Lumpur on Saturday morning, attracted a significant crowd.

This was in spite of the arrest of Bersih 2.0 chairperson Maria Chin Abdullah and secretariat manager Mandeep Singh on Friday evening.

More than a dozen other people from both the Red Shirts and Bersih group were also been detained over a 24-hour period surrounding the rally.

The rally organisers' original plans to convene in Dataran Merdeka for the finale was halted by police as various barricades and human walls were erected along main roads leading to the square.

Kuala Lumpur City Hall (DBKL) had prohibited the use of Dataran Merdeka for the Bersih rally and counter-rally held by the Red Shirts.

Bersih demonstrators who had gathered in Bangsar were not allowed to continue their journey to Dataran Merdeka through Jalan Travers and sought other means such as the LRT and Jalan Tun Sambanthan in Brickfields to reach their destination.

Eventually, the organisers made eleventh hour plans to convene the crowd in KLCC, and the rally was allowed to proceed as planned with no interruption from the police.

Some demonstrators also thanked the police officers on duty before dispersing peacefully.