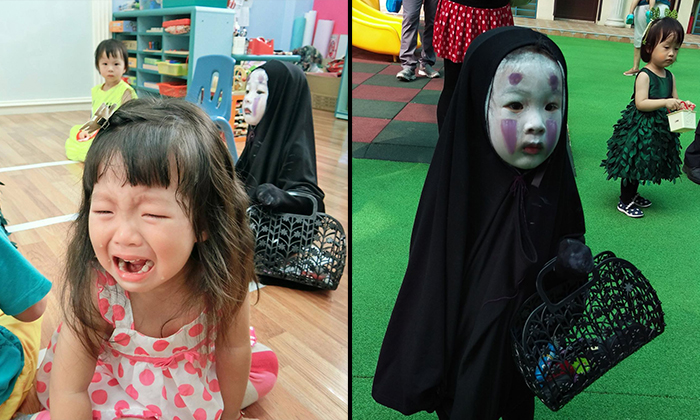 While most little girls would choose to dress up as princesses during Halloween, this Taiwanese kid went for a more "faceless route".

According to her Facebook page, her name is Momo Lu and she is a very big fan of the Japanese animation film "Spirited Away".

An earlier video shows her mother asking her what she wants to be for Halloween and Momo replying excitedly, "no face".

Unfortunately, it seemed her Kindergarten friends were a bit taken aback by her choice of costume, and photos show them crying and trying to sit as far way from her as possible.

In the Facebook post, her mother said: "When Momo first stepped into the classroom, no one recognised her and some of her classmates started crying."

The post has since been shared 14 000 times and has been picked up by Buzzfeed.

Momo really enjoyed her night and her mother also wrote: "After the trick-or-treating walk, all the makeup had come off but she was very happy. Momo is looking forward to the next Halloween and hopes that everyone had a good Halloween."

Related Stories
Halloween decoration removed from Canadian superstore for being too scary
Funny or just a nuisance? 'Clown' scares people in S'pore as Halloween prank
Cute illustrations show what it would be like if animals celebrated Halloween
Halloween
no face
ghibli
funny halloween
lol