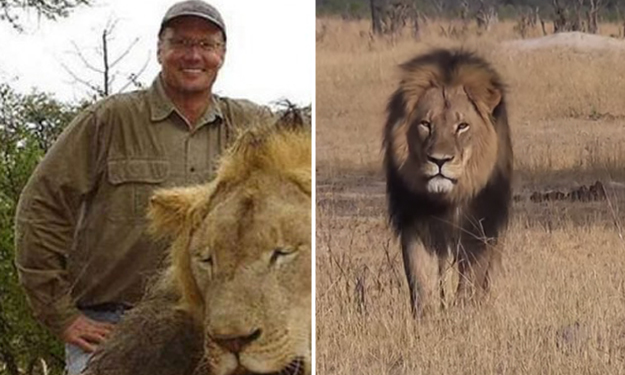 A dentist from the United States has angered the Internet after reports about him killing Cecil the lion in Zimbabwe surfaced.

According to AFP via The Straits Times, Walter James Palmer used a bow and arrow to shoot Cecil, then tracked the wounded animal for 40 hours before skinning and decapitating him.

Palmer, from Minnesota, went to Zimbabwe in July and allegedly paid $50,000 to hunt the lion.

Hwange National Park, where Cecil lived, is a "free roam" zone under Zimbabwean law. Hunting is not allowed in the park and killing any animal inside of it is illegal, reports Vox.

However, Palmer found a way to bypass it -- by strapping an animal carcass to a car parked outside Hwange to bait Cecil out.

He then shot him with a crossbow.

The arrow only wounded the lion. Palmer stalked him for 40 hours, and then shot him again, this time with a rifle. They skinned his corpse and cut off his head.

According to the Zimbabwe Parks and Wildlife Management Authority, two locals are facing charges for assisting in Cecil's killing: a hunter identified as Theo Bronkhorst and a local farmer identified as Honest Trymore Ndlovu.

The Zimbabwean government is insisting that the lion killing is still illegal, and that Palmer did not have the necessary permit.

Police spokeswoman Charity Charamba confirms that they've arrested Bronkhorst and Ndlovu on poaching charges, and that Palmer is now wanted as well.

The Zimbabwe Conservation Task Force charity said that the hunters unsuccessfully tried to hide the dead lion’s tracking collar, which was part of a University of Cambridge research programme.

"We don’t know the whereabouts of the head", it added.

Cecil, aged about 13, was said by safari operators to be an “iconic” animal who was recognised by many visitors to Hwange due to his distinctive black mane; He is quoted as "one of Africa’s most famous lions and the star attraction".

Palmer is an experienced trophy hunter from Minnesota.

He is well-known in US hunting circles as an expert shot with his bow and arrow, and has travelled across the world in pursuit of leopards, buffalo, rhino, elk and other large mammals.

“I deeply regret that my pursuit of an activity I love and practise responsibly and legally resulted in the taking of this lion,” Palmer said in a statement.

“I had no idea that the lion I took was a known, local favourite, was collared and part of a study until the end of the hunt.”

He also insisted on his innocence:

"I hired several professional guides and they secured all proper permits.

"To my knowledge, everything about this trip was legal and properly handled and conducted."

Meanwhile, seething netizens are vowing to draw blood. They have flooded his dentist company's Yelp and Facebook with angry comments, as well as sharing his contact information and address online.

A petition called "Justice for Cecil" have also been signed by 232,000 people and growing.