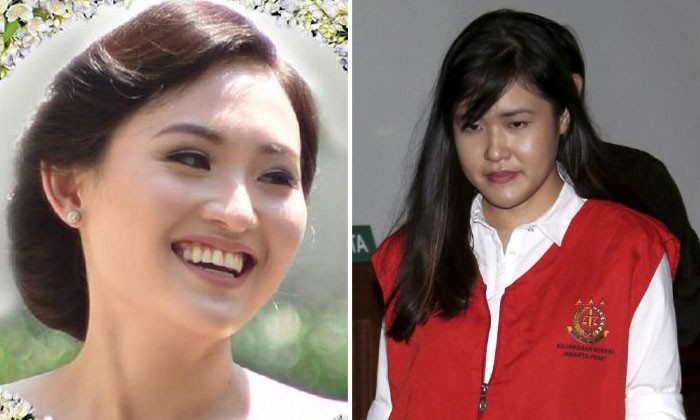 Jessica Kumala Wongso, an Indonesian student, has been convicted of murdering her friend, Mirna Salihin by lacing her ice Vietnamese coffee with cyanide on Jan 6 this year and sentenced to 20 years in jail.

According to News Corp Australia, her crime was deemed as 'vile' and 'sadistic' by three judges in the Central Jakarta District Court.

Wongso, 28, and Mirna, 27, met while they were both studying at the Billy Blue College of Design in Sydney in 2007.

Wongso had gone on to work as a graphic designer at New South Wales Ambulance and stayed in Sydney whilst Mirna had returned to Jakarta.

The judges believe that the crime was motivated by revenge and jealousy as Mirna had told Wong to dump her Australian ex-boyfriend, Patrick O'Connor.

Months before the murder, Mirna got married to Arief Soemarko and did not invite Wongso.

Arief Soemarko feels that the family will never be satisfied by the sentence as 'Mirna will never come back'.

The family wanted a death penalty but was happy enough that Wongso was judged as guilty.

Wongso did not accept the verdict as she feels that it's 'not fair'.

She escaped the death penalty as Indonesian authorities guaranteed the Australian government that she will not be sentenced to death in exchange for evidence.

The Judges recounted evidence from Australian police that in 2015 Wongso was depressed and often drunk in Australia.

She was known to have smashed her car into a Sydney nursing home and attempted suicide.

Her ex-boyfriend in Sydney had also applied for Apprehended Violence Order against her.

Furthermore, the court got evidence from Wongso's former employer who said that Wongso had told her that she knew 'exactly how to kill someone and knew the right dose'.

However, toxicology reports had tested negative to cyanide in the gastric fluid, bile, liver and urine.

In fact, only a small amount of cyanide was found in Mirna's stomach.

The three Judges still ruled it as murder because Wongso had arrived earlier at Cafe Olivier, on the day of the murder to secure a 'safe' seat.

She was also seen buying three paperbags of soap from a nearby shop, which she placed on the cafe table to obscure the view of the cafe's CCTV camera.