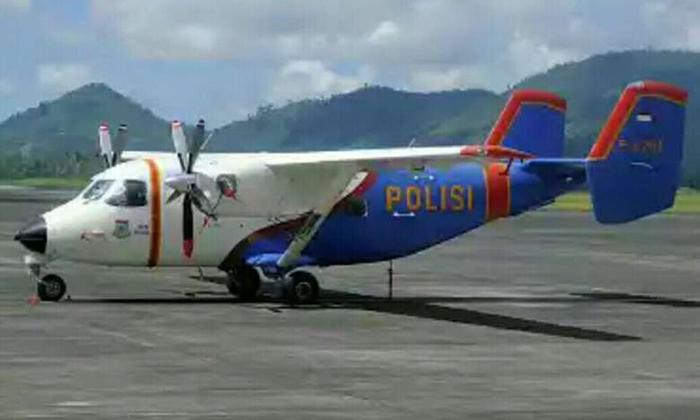 Update at 12.45pm: Rescuers have recovered a body from the waters off Pulau Lingga, in the Riau Islands, near the crash site of a police transport aircraft that went down on Saturday (Dec 3) morning, reports The Straits Times.

Riau Islands police spokesman S. Erlangga, said in a statement issued at 11pm on Saturday local time, that the body was found by Basarnas, Indonesia's national research and rescue agency, earlier at 5.55pm, and it will be brought to nearby Batam to be identified.

Batam is an hour behind Singapore. He also said there were a total of 13 people, including the pilot and crew, on the plane that crashed, even though earlier reports based on a flight manifest had stated 15.

Mr Erlangga said preliminary investigations indicate that there were 16 people on board, but three had disembarked at Pangkal Pinang, in the Bangka-Belitung Islands, before the plane left for Batam.

Original article: A twin-engine aircraft operated by the Indonesian police crashed into the sea near Batam on Saturday (Dec 3) with 15 people on board, reports The Straits Times.

There are no reports of survivors. The Indonesian Navy has deployed three ships and two patrol boats for the recovery operation.

Wreckages of the M-28 Skytruck were found by fishermen in waters off Pulau Senayang, Riau Islands province, at 11.30am local time.

Body parts were found among the debris.

Those on board included police officers and aircraft maintenance crew, among others.

The Civil Aviation Authority of Singapore (CAAS) confirmed that an Indonesian police light aircraft, P4201, had lost contact with Singapore air traffic control in the Singapore Flight Information Region at 11:22am Singapore time.

Singapore has been managing flights over some areas in Riau since 1946.

Search and rescue operations from Singapore were subsequently activated by the Singapore Rescue Coordination Centre, which is managed by CAAS and supported by various other agencies, said CAAS in a statement.

"Its last known radar position was about 40 nautical miles south-east of Tanjung Pinang," CAAS said of the Indonesian aircraft.

"With clearance from the Indonesian authorities, one Super Puma helicopter and one Fokker 50 aircraft are currently on-scene supporting the Indonesians... the CAAS Crisis Management Centre has also been activated."

The plane was heading to Batam from Pangkal Pinang, in the Bangka-Belitung Islands when it disappeared from radar, Tanjung Pinang Naval Base commander First Admiral S. Irawan told The Straits Times.

CAAS said the plane took off at 10.24am Singapore time and had been expected to arrive in Batam at 11.58am.

Batam is one hour behind Singapore. "Before it plunged, a loud explosion was heard by local residents on the ground," added Admiral Irawan.

The Indonesian Navy has deployed three ships and two patrol boats for the recovery operation.