"I want to touch your private part," says Malaysian security guard to pregnant woman, gets beaten up by her husband 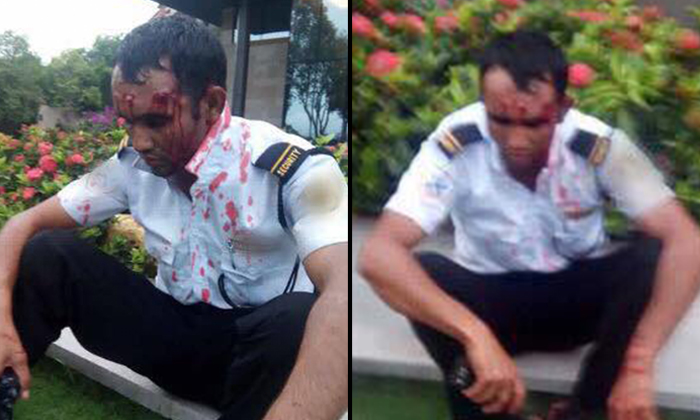 A security guard was left drenched in his own blood after a walloping delivered by a angry man whose pregnant wife he allegedly tried to sexually assault.

The husband, Jamal Ismail, talked about the incident in a posting that was shared by Facebook page Peon JB.

The post details how the security guard continually harassed his pregnant wife at Johor Bahru’s R&F Princess Cove, and that he had beaten the guard for his disgusting behaviour.

“A security guard went in and pushed my pregnant wife while touching his genitals and told my wife he wants to touch her private part.”

The terrified woman promptly pushed the guard away and ran to her husband.

Upon listening to his wife, the infuriated Jamal immediately went to look for the guard, based on the physical attributes described by his wife, and proceeded to give the man a beating.

“Without waiting for him to respond, I immediately taught the guard a lesson.”

Jamal also recalled how he became even more angry when another guard intervened and tried to beat him up in an attempt to defend his colleague.

The perpetrator is believed to be a Bangladeshi national.

After the incident, the management reached out to Jamal, who agreed not to press charges.

However, Jamal still decided to share his story on Facebook to caution the public about staying vigilant.

Netizens have spoken out on the incident, and while some have chastised Jamal for going too far, others have commended him protecting his wife, calling for the perpetrator to be jailed.

“Pity the wife who is pregnant and still get this kind of treatment.

“Hopefully she is ok and may the stupid security guard be locked up in jail.”

Related Stories
Molested victims speak up in Facebook Live video about sexual assault, urge other women to be vigilant
Man positions himself behind attractive woman and brushes his groin against her right buttock on MRT
Man robs masseuse, sexually assaults her for an hour and threatens to kick her private parts
molest
outrage
security guard
Malaysia
Malaysian security guard tries to molest pregnant woman