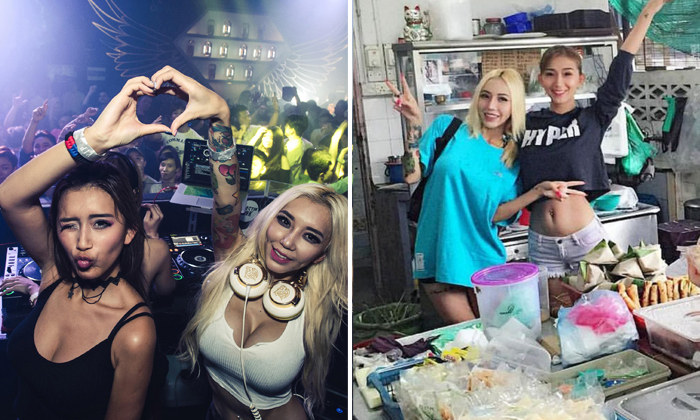 They are basking in the limelight today, spinning music in glitzy, glamorous clubs and parties around the world.

But not everyone knows that The Leng Sisters, as this pair of Malaysian siblings call themselves, have humble family beginnings, back in Penang where they were born.

Their father died when they were very young and they were raised by their mother and their grandmother.

Mum is a hardware shop owner, while grandma now runs a popular laksa stall in Sungai Petani in Kedah, according to Malaysian news website The Coverage.

And even though the sisters may be living it up at parties like FashionTV Club's Pitstop Party at Clarke Quay during the Formula 1 weekend in Singapore, they still help sell laksa at their grandmother's stall whenever they are back in Malaysia.

Younger sibling Leng Sean, 28, said: "Growing up without a father strengthened our family bond. Our family is filled with very strong women, they all have their own businesses."

The siblings formed their sister act only over a year ago, but they have been close since they were young.

Older sister Leng Yein, 31, settles the technical stuff and spins the records, while Leng Sean emcees and works the crowd.

The pair spoke to The New Paper on Saturday night before their performance at FashionTV Club.

During the interview, Leng Yein was straightforward, almost aggressive, whereas Leng Sean appeared gentler in manner and more approachable.

Leng Yein said: "(Whenever people or companies) want something, they will always go to her (Leng Sean) because when they come to me, it's a no.

Leng Yein, a former beauty queen who has been touted as one of Asia's hottest DJs, said of her sister: "Since young, we've been best friends. We never ever argue.

"Even when people say things like my sister is prettier than me, I would agree because she's the 'original' one and I'm the fake one - I am the one who has had more plastic surgery.

"Basically, I don't have any friends. My sister is my only friend.

"We do not believe in friendship because friends will get married and be busy with their own lives. But we know family will always be family, we believe in family values."

A "beauty ambassador" for several Korean plastic surgery clinics, Leng Yein is no stranger to controversy. She was slammed for openly supporting plastic surgery, having done procedures on her nose, breasts and eyes.

At the same time, some young fans see her as a role model for being outspoken and "daring".

Leng Yein also made headlines in 2014 for her online spat with Singapore model-DJ Tenashar.

DJ Tenashar had accused her of sabotaging her console at a concert at Sunway Lagoon in Kuala Lumpur.

She also accused her of trying to "copy" her "in so many ways", a charge that Leng Yein vigorously denies.

Being criticised on social media is also not new to the sisters.

The haters comment mainly about their plastic surgery procedures, but the sisters just laugh it off.

In July, Leng Yein's relationship with a Malaysian law student eight years her junior created a stir because of their age gap.

Not that she cares - she is actually proud that she has a Facebook hate page with over 60,000 "likes" created just for her.

Said Leng Sean: "There will always be mean comments about my sister and me, but we don't really care."

Leng Yein added: "Everyone faces hate on social media. But because we are more popular, we have to take more s*** than other people.

"If a comment really makes me upset, I will just block it."

The duo are also immune to receiving provocative and obscene images from male, and even female fans.

Said Leng Yein: "You want it in whatever shape, or size, or colour, we've probably received (a photo of) it before."

Leng Sean added: "Even when we go out, people have said things like, 'Be careful, we are going to hurt you'."