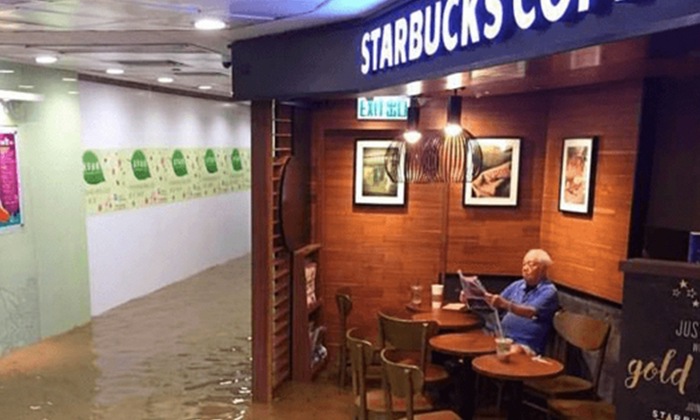 Remember the pork-bun-eating-in-typhoon lady from Taiwan? Hong Kong has their own version in the form of this "Starbucks uncle".

Typhoon Haima struck Hong Kong this week, causing flash floods and winds over 60km per hour. Many residents have chose to stay home and most shops have been boarded up.

However, this elderly man enjoying a cup of joe at Starbucks while casually flipping the newspaper has clearly not gotten the message.

The photo was snapped by Kristy Chan, 23-year-old medical worker at a shopping center in Hong Kong’s Chai Wan district. It was later posted on Facebook by TV Must, a local news channel.

The photo quickly spread around the Internet, with Facebook and Reddit users photoshopping the elderly man into other "scenarios".

The elderly man was later joined by a young guy wearing headphones, and other photos posted by users show the Starbucks staff patiently waiting for the duo to finish their drinks.