Here's how to outsmart pickpockets the next time you travel 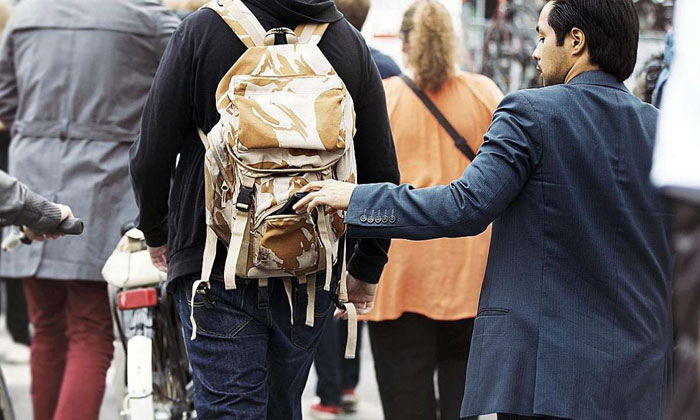 Travellers are easy prey for pickpockets, but being vigilant in a foreign land goes a long way to not losing your possessions.

In 2012, on the first night of engineer Ng Chee Keong's holiday in Bangkok, when he was walking back to his hotel, someone approached him with a bag of keropok.

But the man persisted, continuously pushing the bag of prawn crackers towards him.Just as suddenly as he began, the man stopped, hopped onto a motorcycle driven by a friend nearby and left.

It was then that Mr Ng realised his $1,088 iPhone 5, which he kept in his front pocket, was gone.

He says: "While pushing the bag onto me, the culprit picked my pocket. I didn't feel it because of the pressure from the bag.

"He is among many Singaporeans who are victims of theft and pickpockets while travelling overseas.

Although figures are not available, travel companies say such incidents are rampant.

"Cities in Spain, Italy and France are most frequently brought up as places where tourists need to be on their guard.

Tour companies have plenty of stories.

Last year, a Singaporean man, while trying on a shirt in a factory outlet store in Madrid, placed his bag on the floor next to the display shelves. Within seconds, the bag - containing his passport and cash - was gone.

In June this year, a Singaporean woman was queuing for tax refunds at Barcelona Airport. While looking at her documents, she left her sling bag unzipped. She soon found her passport and purse missing from her bag.

Ms Alicia Seah, 51, director of public relations and communications at Dynasty Travel, says that from her understanding, about 300 pickpocket incidents are reported in the city of Barcelona every day.

"Singaporeans can be easy prey for predatory pickpockets, especially because coming from Singapore, a 'safe haven', we can sometimes take safety for granted.

"We might leave our bag on the floor or on unoccupied seats - unattended - and it can be an easy target for theft."

The agents note that pickpockets sometimes operate in syndicates, with one person distracting the victim while another commits the crime.

Minors are sometimes involved in these syndicates as well, notes Ms Chang.

"Victims are generally not as suspicious of children. And when caught, minors also cannot be held by the authorities," she adds.

Her advice? Do not keep all your valuables in one place. Sling your crossbody pouch in front of you and stay away from strangers and crowded areas.

Thankfully, there are also careful - or just lucky - travellers who have never had anything stolen from them.

Mr David Chang, 64, who owns a textiles company, has been travelling three or four times annually for the last 30 years, but has never been a victim of theft.

This, he says, is because he is extremely careful with his valuables.

He keeps his passport in the hotel safe and carries a photocopy of the document to identify himself.

The trousers he wears have deep pockets and he carries a thick wallet that cannot be easily removed.

Only half of his cash goes into his wallet. The rest is spread out in other pockets.

"I don't let strangers come close to me and I don't entertain random requests to fill in surveys or take photos."

He adds: "When travelling, it is easy to throw caution to the wind, especially when you see something exciting. But because you are in a foreign country, it is important to be vigilant at all times."

Related Stories
S$1,000 cash belonging to S'pore bloggers goes missing at Bali villa -- and their holiday only gets worse
Here's how this US girl has travelled around the world -- for free
Here's what you can expect at a 6-star hotel in North Korea
More About:
travel
scam
thief
theft