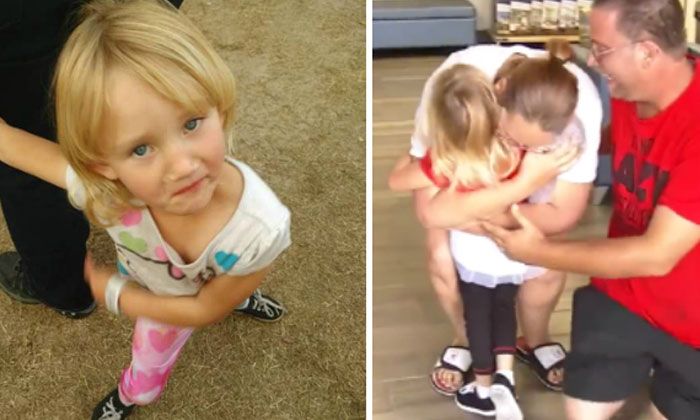 A four-year-old kidnapping victim's tearful reunion with her family will make you cry buckets.

A video on ViralThread shows Rebecca Lewis who was recently kidnapped, but found on Monday in Memphis, Tennessee, reuniting with her family.

And we're not kidding when we say that this video will melt your hearts.

According to the site, Rebecca was abducted from her home in Lakeland, Florida, on Saturday by a 31-year-old male by the name of Wild West Hogs.

Originally named Matther Clark Pybus, Hogs was Rebecca's family friend, and even lived with them for a short while. However, he hadn't seen them in two years, ever since he pulled a gun on them in their own home.

According to his relatives, Hogs did show signs of depression and bipolar disorder, but none expected him to resort to this.

Upon arriving at the hospital, the police noticed someone trying to escape in a car. They were shocked to find Wild West Hogs and Rebecca in the vehicle, and arrested him on the spot.

The two were seen at a hospital but fortunately Rebecca didn’t appear to have any injuries. According to the police, the car was stolen from Hogs' mother.

Related Stories
This heartwarming rescue of a kangaroo in Australia is sure to make your day
Pregnant woman gets sweet surprise from orangutan at England zoo
Patrons clap for Certis Cisco officer after he saves man who choked on food at Joo Seng food court in minutes
More About:
heartwarming
child
kidnap
cute
viral
online