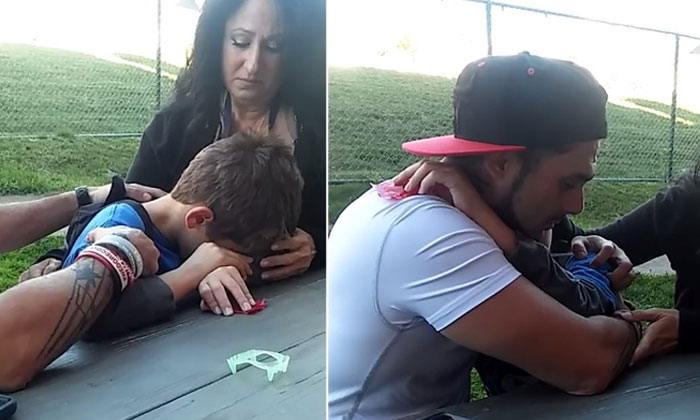 Here's one of the most heartbreaking videos by Distractify.

Yesterday (Oct 12), a dad by the name of Brenden Bickerstaff-Clark, from Youngston Ohio, decided to share his son's reaction to learning that his mum had passed on due to heroin overdose, the night before.

The video had since garnered more than 23 million views on Facebook, and even spurred discussions amongst netizens, on whether it was ethical for the father to share his son's mourning on social media.

Here's what the description of the video wrote:

"This is for any and every addict with children. Today I had to tell my 8 year old son that his mommy died from a drug overdose last night. This is the realization and reality of our disease. Don't let this disease have to make someone tell your child that you're dead because of drugs."

"This was one of the hardest things I've ever had to do. My son has no mother because of heroin... kinda hard to hear but you can hear what we're saying. Please get help so our children don't have to suffer."

The reactions were mixed. While some had praised the father for raising awareness, others felt that it was too intimate a moment for the world to see, thus criticising him for it.

Here are comments by some netizens:

"I've just watched this and ended up in tears as I felt the young boy's pain. It's so sad and I can't imagine what you must have been going through. That took some serious bottle telling the lad the awful news, I don't wish that on anyone."

"And now this very personal part of this kids life is all over the internet. I'd be furious if someone recorded me as I cried over my mother's cancer ridden corpse. Who ever posted this isn't a genuinely nice person."

In response to the criticism, Bickerstaff-Clark stated that he was a former addict himself. "'I am a recovering addict myself with 94 days clean today... please share and help maybe help save a child's parent's life," he wrote.

Watch the video and tell us what you think.

Related Stories
Crowdfunding drive raised over $46,000 for Thai teen hit by a car
Baby with rare liver disease passes away despite best efforts of parents, doctors and good samaritans
'I want my daddy,' cries girl whose dad died attempting to save her at JB waterfall
More About:
heartbreaking
drug
drugs
child
abuse
viral
death