Heartbreaking photos: Father dies while hugging daughter to save her from collapsing building in China 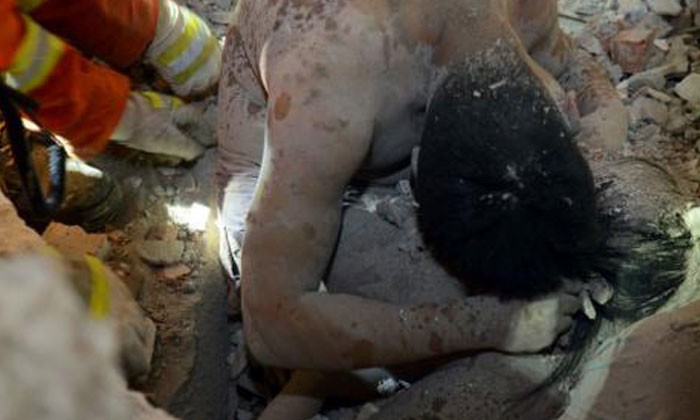 A girl who was protected by the embrace of her dead father was the last survivor pulled out of the rubble of collapsed multi-storey buildings in China, said reports on Tue (Oct 11).

According to AFP via AsiaOne, the girl's name is Wu Ningxi and she was found deep in the debris of four six-storey residential buildings.

State broadcaster CCTV said that she was saved after more than 12 hours since the buildings crumbled in Wenzhou in the eastern province of Zhejiang, killing at least 22 people.

It also added that the three-year-old survived with only minor injuries due to the protection provided by her father, who was found dead after shielding her from falling rubble,

"The child was able to survive entirely thanks to the fact that her dad used his own flesh and blood to prop up a life-saving space for his daughter," a rescuer told the China Youth Daily.

Her father, a 26-year-old factory worker, was found under a thick cement pillar, draped over his daughter.

The family had been buried alive in their living room and Wu's mother body was discovered near Wu and her father.

Her hair was matted with dust as they carried her out and placed her onto a stretcher.

The search through the three-storey-high debris concluded early Tue (Oct 11), with 22 confirmed dead and only five survivors other than the girl rescued, said the Lucheng district government at a press conference.

Recent heavy rainfall combined with the poor quality of construction and age of the buildings, built by the villagers themselves, were probable contributing factors, it cited a preliminary analysis as saying.

Neighbouring buildings constructed in the 1970s were being demolished to prevent further collapses, the official Xinhua news agency reported.

The buildings had been packed with migrant workers, among them Wu's parents, hundreds of millions of whom have moved from China's countryside to its towns and cities in recent decades, their labour fuelling the country's economic boom.

Many remain poorly paid and face restrictions on buying homes in the areas where they work.

China has seen several building collapses in recent years, with some blamed on low-quality construction.

In May 16 people were reported dead after a residential building in Guizhou province in the southwest collapsed due to landslides.

Related Stories
'I want my daddy,' cries girl whose dad died attempting to save her at JB waterfall
Chinese locals use ropes and nets to save soldier from being swept away by floodwaters
Hysteria as child is dragged from pool in China after allegedly getting electrocuted
More About:
dead
building collapse
China
parent
dad saves daughter from rubble