Guys post photos of them 'surfing' on turtle, get slapped with $15,000 fine 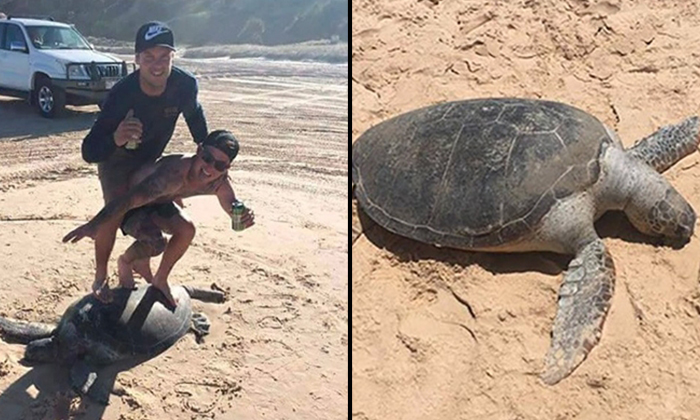 Two men may be handed a $15,000 USD fine for standing on the back of a sea turtle, and posting a photo of the act online.

In the first posting accompanied by the caption: "Surfed a tortoise on zee weekend.. gnarly duddddeeee", it could not be discerned if the turtle was dead or alive.

A second photo of the turtle, with its head in buried in the sand and the letters ‘RIP” scribbled onto the sand around it was also shared by the duo.

A Queensland Parks and Wildlife Services spokesperson commented that they have launched an investigation regarding the incident, though there are evidence that suggest that the turtle was dead at the time of the photo, according to Distractify.

Royal Society for the Prevention of Cruelty to Animals Queensland spokesperson, Michael Beatty said of the incident:

"These guys are just complete idiots — there's no way they should be doing what they were doing.

"Per usual, they've been idiots and posted it on Facebook...(and) hopefully people on Facebook will let them know what idiots they were.”

The pair have also come under fire for the posts.

Netizens have called the act disgusting and the two a pair of ‘Idiots’.

"Dead or not it's still wrong and inhuman (sic), like do we think it's acceptable to stand on the back of a dead human being?

“No. So it's not all right to stand on the back of a dead animal.”