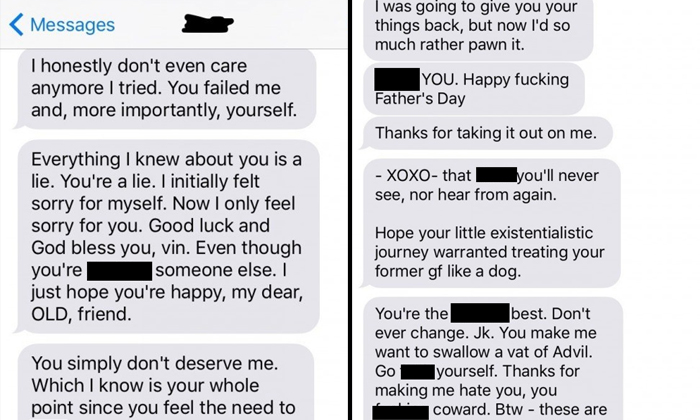 They say you should never be friends with your ex, and maybe this text rant posted by Distractify will show you why.

This poor guy, Vin, received a bombardment of text messages from his bitter ex-girlfriend who accused him of "not having any interest in hanging out as friends".

She also claimed she would stop texting him "going forward" although her chain of texts show she may had a change of heart.

She then tells him that she is not texting to get him back because he broke up with her "without reason".

In between the lengthy text messages, she also sends him reminders to read the novel she wrote and sent to his email.

She also alternates between apologising for being demanding and accusing him of causing her "pain and humiliation".

At the end of the one-sided conversation, the girl semi-apologises for her rant and puts it down do being "wasted and slightly bitter", but not before calling the poor guy "another failure and disappointment".

Related Stories
SG confessions: Singapore women's most shocking Tinder experiences
'My cheating husband brought our daughter to meet his mistresses'
My hubby arranged his mistress' abortion in front of me
'I slept with a relative and now I can't end the affair'
crazy ex
girlfriend
crazy