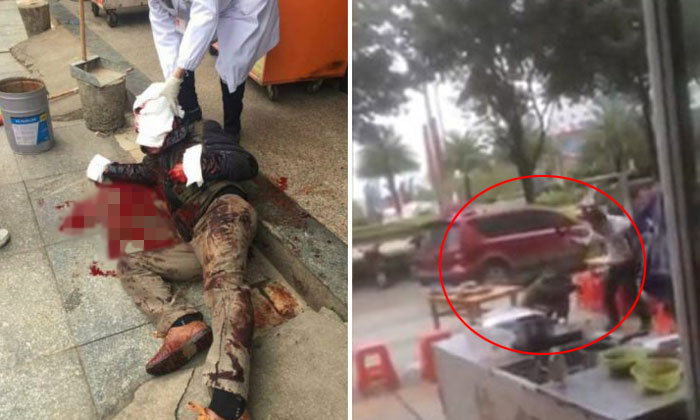 The following video features a man getting slashed repeatedly and stomped on as if he was a dead animal.

According to The Coverage, the clip was posted by Vincent Goh on the Batu Pahat Chit Station Facebook Group, where it then started to circulate and become viral.

The incident reportedly took place in Malayia, at a food stall in Batu Pahat Batu Bahat.

The victim was helpless as he got slashed, staying still and screaming in pain as the man abused him.

The video is rather terrifying and this is evident from the loud screams which can be heard from the video. As seen, no one dared to get close to that man, and even the person filming it was hiding in a corner -- perhaps they too were afraid of getting slashed?

As seen from the image, both the victim and the floor was left bloodied, but this does not stop the man from abusing the guy further -- he continues to stomp on the victim nonetheless.

Halfway through the video, a passerby rushed over to stop the man, but to no avail. He was instead told to go away.

It is unsure where this incident took place and why the victim was getting slashed, but we sure hope the case gets resolved soon.

Watch the video below and share with us your thoughts in the comments below! Do take note that the video might be a little visual.