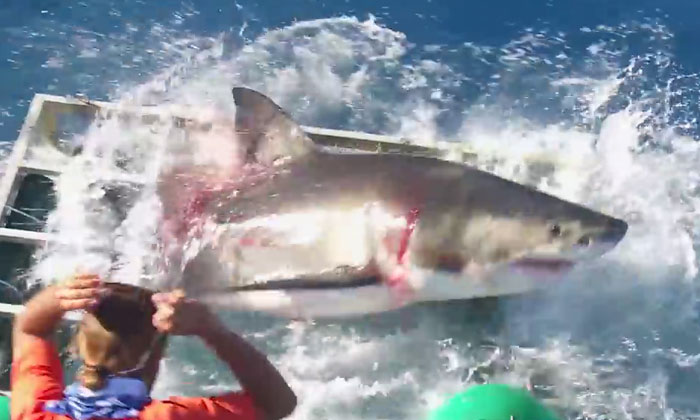 Terrifying footage of a great white shark breaking into a diver's tiny steel cage has surfaced, reported the Daily Mail.

The video is believed to have been filmed off the coast of California, and captures the moment the shark-watching expedition went unexpectedly wrong. The team appeared to have been trying to capture images of the predator eating.

At the start of the clip, a large shark is seen surfacing to eat a piece of floating bait while the diver sits in the nearby cage to take photographs of it.

Things take a turn when the thrashing shark somehow ends up in the cage, as the water begins frothing.

Upon seeing what is happening, members of the crew on the boat immediately throw the cage hatch open, giving the shark a means of escape. The shark is then seen wriggling free and bleeding badly from its gills on the left side, likely a result of injuring itself while entering the cage.

Some tense moments later, the diver emerges tapping the top of his head with his right hand - a diving signal that means "I'm okay". He then scrambles back to the boat to the sound of claps and cheers.

Once safe on the boat, the shaken man exclaims: "I'm still alive."

Despite parts of the California coast being great white breeding territories, attacks are relatively rare, although one did happen earlier this year, according to the Daily Mail.

Maria Korcsmaros, 52, was attacked by a shark, believed to be a great white, off Corona del Mar State Beach in June, leaving her with bite wounds on her leg.

Following the attack, at least two great whites measuring up to 3.5m were spotted in the water nearby, prompting beaches to be closed for miles around.