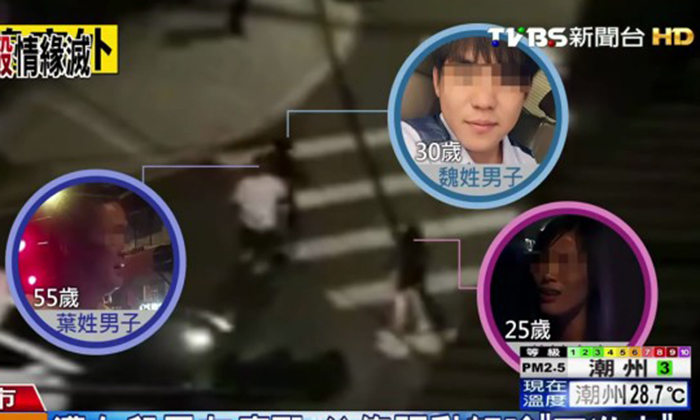 A man learnt the meaning of instant regret when he attacked the man he thought was a third party in his relationship, only to realise that he was assaulting his girlfriend's father.

The young Taiwanese man went to a ginger duck restaurant to confront his girlfriend about spotting her with another man.

The very jealous boyfriend charged at the two to break them apart, reports World Of Buzz.

The young man grabbed his girlfriend and then choked the elder man while yelling, “Who dares touch my woman".

He then proceeded to beat him with with an accomplice.

Sadly, he found out halfway into the assault that the man he was bashing was actually his girlfriend's father.

The girlfriend screamed at the boyfriend, “Stop hitting him! Stop hitting! He is my father!”

The not-too-bright boyfriend immediately realised his mistake and asked for forgiveness.

Sadly, the father was not really in a forgiving mood after the accusation heaped upon him and his daughter.

With the girl's father wanting to beat him up, the boyfriend tried to flee but was caught.

Although police arrived at the scene and tried to break up the fight, the father still did not let go of the boyfriend.

A video of the fight, showing the father, in a white shirt, dragging the boyfriend, who is in black, across the streets.

All the while, the girlfriend can be heard& continuously screaming at them to stop fighting.

There was quite a commotion going on till police were dispatched to the scene.

It was said that upon realizing he was wrong, the boyfriend tried to flee but the officers blocked him from escaping.

As hilarious as the scenario was,& many advised the woman to leave that boyfriend immediately for being violent.

Though after this fiasco, he will probably be single for a long while.

Related Stories
'My husband's sister acted like she owned him and made my marriage a nightmare'
'My BF confessed that he used to pay for sex while I told him about my ugly past -- but love triumphs'
Woman's ex-BF started showing up wherever she was: 'I constantly felt haunted'
Woman who stabbed hubby to death after he attacked her and threatened to kill daughter gets a year's jail
'My wife refuses to have sex with me, I think she's cheating on me with our relative'
boyfriend beats girlfriend's dad after thinking they are having an affair
relationships
fail
couple
fight