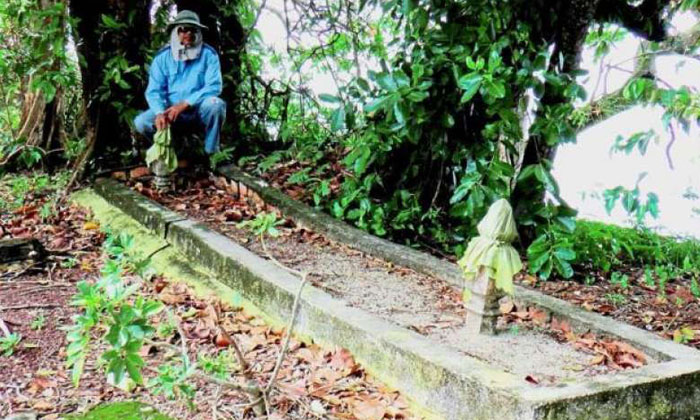 A recent discovery might provide the proof that early settlers in Malacca, including the Malay Sultanate era, were large in structure.

Historian Mohd Fuad Khusari M Said, appointed by the Malacca government to search for new historical sites, claimed to have discovered skeletal remains of what is believed to be a larger-than-usual man in a cave in Pulau Upeh, an island off Malacca. He had discovered the bones partially exposed above ground.

And about 1.2km outside the cave, he found two graves unusually large in dimension - measuring about 5m by 0.5m. The graves were about 15m apart.

"I have reported the findings to the authorities because we have no right to excavate the site without permission," said the historian who has 10 years experience in archaeological studies.

Based on the size of the skull and the length of the bones found in the cave, Mr Fuad believes the remains could measure between 3m and 5m long. The length of the skeletal remains match the tomb of Sultan Al Ariffin Syeikh Ismail and the graves of the seven warrior brothers in Pulau Besar.

Other findings of  “gigantic graves” in Pulau Besar included those believed to belong to religious leaders from Yemen, Saudi Arabia, India and Java, who had gone to Malacca to spread Islam during the early days of the Malacca Sultanate.

"There was no excavation work at any of these grave sites, so the tales of giant settlers remain a myth," he said. "But the research on this latest find could prove or disprove claims that giant-sized men roamed Malacca a long time ago."

Looking at the modern man, heights reaching 3m or 5m may seem unthinkable. But Mr Fuad said there are records of giant races dating back to the Mayans. There was also a newspaper report in 1871 on the finding of some 200 giant skeletons in Ontario, Canada.

"So it's not strange to have sightings of giants in this part of the world," he said.

Institute of Historical and Patriotism Studies of Malaysia's chairman Mohd Jamil Mukmin said the graves could have been dug larger than usual as an honour to the dead.

Javanese religious leaders travelling to the Port of Malacca to teach Islam to the locals and traders in the 15th century would use Pulau Upeh as a base.

Chief minister Idris Harun, who confirmed that he had been informed of the latest finding on the island, said: "We have commissioned the historian to provide facts about undiscovered historical sites and research on the latest discovery of giant-sized remains is ongoing."

He added that villagers from the mainland had placed tombstones on the graves a few years ago.

Malacca's Barisan Nasional social service centre's director Amir Hamzah Aziz said the story of a mysterious giant's remains on Pulau Upeh has been circulating since the 1990s. "Many claimed to have sighted the remains there. If it's true, we must preserve it for the future generation."