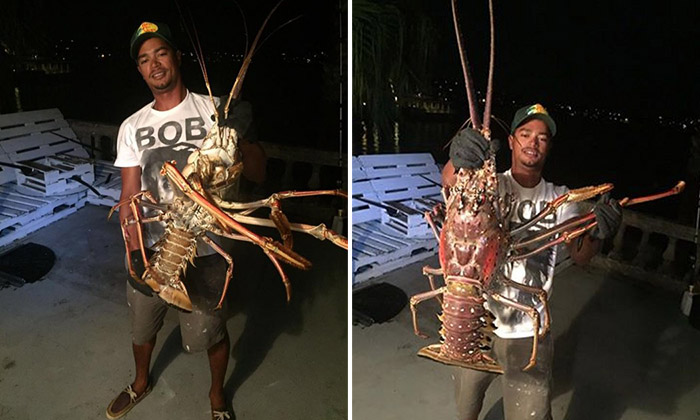 Anglers in Bermuda, California were expecting to reel in snappers, but what turned up instead was a monster lobster weighing 14 pounds (6.3kg).

As Lady Luck would have it - it escaped the cooking pot and was released back into the water after it was caught last Saturday (Oct 15).

Fishing enthusiasts on Sanctuary Marine Bermuda's luxury charter fishing boat were stunned when they stumbled upon the find, which they believed might have been the aftermath of a lashing storm.

It is believed that destructive ocean storms, such as the recent Hurricane Nicole, are capable of forcing sea creatures to wind up at unexpected places.

Pictures of the whopper were posted on the boat company's Facebook page with a photo captioned "Hurricane Nicole blew in some sea monsters... 14lb lobster ...He was released, safe and sound."

The lobster was not the largest caught on record.

In fact, it was only less than one-third of the size of the biggie listed in the Guinness Book of World Records, which weighed over 44lbs (20 kg).

It was caught off the coast of Nova Scotia, Canada.

Ultra large lobsters are usually released or live out their lives in museums and aquariums. Lobsters fated for the dinner table are much smaller - between 1.5 and 3.5 pounds.

Mr Tristan Loescher, who posed with the lobster for the photo, told Inside Edition: "Never in my life have I seen anything this big. I think never in my life will I see one this big again. I decided it was best for it to go back to the home he came from."

The post attracted many Facebook users who weighed in on the lobster's size, the kindness of the men who let it go, and of course, its potential taste.

Related Stories
Mysterious 'shell' spotted in Buangkok has 'menacing' legs and a life of its own
Canberra Link resident finds 'leafy' insect with 'fish-like' eyes at home
What's this lizard-like creature in drain near Plaza Singapura?
Monster lobster caught after hurricane
unusual
creature