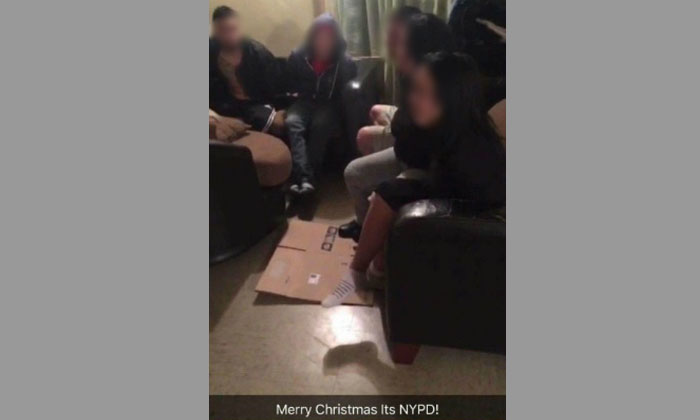 A New York Police Department officer has been suspended after posting a Snapchat of a family that was handcuffed during a raid.

The officer took a Snapchat of a family after raiding an apartment and captioned it "Merry Christmas its [sic] NYPD."

Kimberley Santiago, one of the apartment residents, told ABC7 that a warrant squad came to her apartment at about 6:30 a.m. and put everyone in the apartment in handcuffs.

"The things that he wrote, it's like, this what you all do?" Santiago said, reports Gothamist.

"If he did that to us, picture how many other families he's done that to."

Early reports suggested that in addition to the social media humiliation, the NYPD raided the wrong address.

However, while police wouldn't tell ABC what they were doing at the apartment, the department did claim officers had the correct address.

The apartment residents told the Post that the officer who put the picture on Snapchat was laughing and looking at his phone, but at first they thought he was texting.

Internal Affairs is investigating the incident after the family made a complaint, and the officer has been suspended without pay.