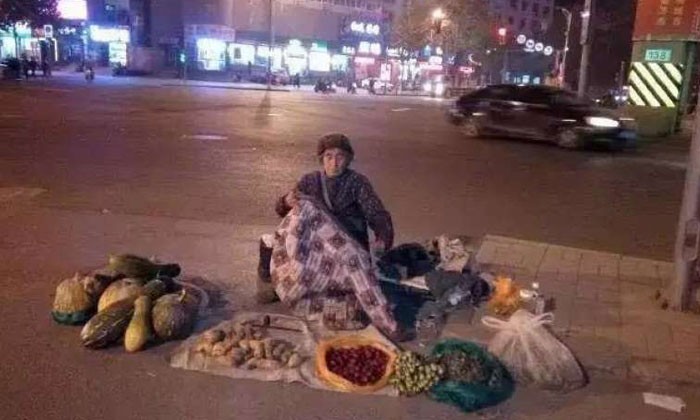 An elderly woman has been selling vegetables late into the night in Jinan, the capital city of Shandong, for about a month, making residents who have seen her wonder why.

It turned out that Madam Wang, who is about 70, is saving up for her son to buy a home.

Her plight, which highlights the high cost of property in China, made the headlines after she was interviewed by a reporter from Qilu Evening News.

Despite the chilly weather, she has been seen tending her stall till about 11pm.

She says she sometimes spends the night on the street, or pays two yuan (S$0.42) to rent a booth at the farmer's market to sleep.

In the morning, she takes a bus back to her village to collect more produce.

Her husband helps her with the harvest and farming, Qilu Evening News reported.

As the wait for the bus can take a while, she returns in the afternoon to sell the vegetables.

Usually there is produce left, which is why she is there till late. She brings her meals with her, which on the day the reporter visited her, was a cold mantou and water.

Her son, who works in Weihai, a coastal city in eastern Shandong, is a university graduate and earns about 4,000 yuan (S$830) a month.

He is married and has a four-year-old daughter.

The family's low income means that he has been unable to save up money for a house.

Madam Wang was worried about him, and decided to help him in whatever way she can.

She has reportedly earned a few thousand yuan from the sale of her vegetables.

Customers told the newspaper that they buy from her as she seems cheerful and resilient despite the long hours and cold weather.

Some have even sent messages to their friends to support her.

When her son found out what she was doing from the news, he cried, he told reporters.

"I feel terrible, but it also motivates me," he said. "I really couldn't save a single cent."