Driver of tour bus which crashed in Taiwan was overworked, according to his daughter 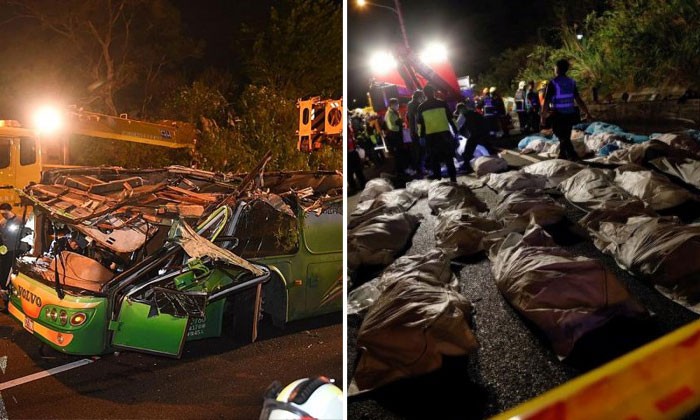 The Taiwan bus which veered off a highway on Mon (Feb 10) night was driven by Miss Kang Yi- jen's father who claimed he was overworked.

She said, "I think he was fatigued while driving.

"My father worked very hard to pay our mortgage and tuition, but they are trying to lay the blame on him."

44 people were returning from a farm in the central Taichung area but the bus they were in veered off a highway on the outskirts of Taipei.

The bus driver is among the 33 people who were killed in the tragic accident.

According to Agence France-Presse via The New Paper, reports claimed the driver of the bus had been toiling for 14 hours straight.

A highway police officer said, "Through a highway surveillance camera, the bus was speeding at the time of the accident."

"(Police) do not rule out that possibility the bus driver was fatigued due to long hours of work..."

However, according to a Travel Agent Association of Taiwan spokesman the driver had "sufficient rest",

The driver was facing two outstanding traffic violations which includes one for not wearing a seat belt, but there is no drink-driving record, according to the transport ministry.

One rescue worker described the scene,"It was like a hell with body parts of some victims scattered around the bloodstained bus.

"Some of the bodies were found metres away from the bus, along with a dozen seats apparently tossed out of the coach after its top was torn apart."

Distraught relatives have also gathered to mourn their loved ones.

Some returned to the devastating scene of the accident yesterday (Feb 14) to perform a religious ritual for the deceased.

One family member said the agency that organised the trip should "take responsibility" for the what had occurred.