Donald Trump tweets about China's seizure of US naval probe -- but can you spot what's wrong? 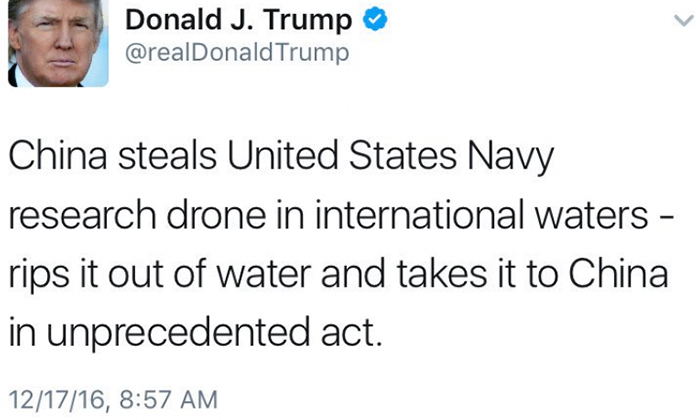 US President-elect Donald Trump came under the media spotlight yet again, after sending a tweet on Saturday (Dec 17) that called out China for its seizure of an unmanned US naval probe.

“China steals United States Navy research drone in international waters - rips it out of water and takes it to China in unpresidented act.”

His misspelling of ‘unprecedented’ quickly became a hot topic on social media, reports The Straits Times.

Many netizens mocked him for the mistake, and further denounced his deeply divisive politics, and verbal gaffes.

However, Trump supporters have jumped to his defence, saying that critics were exaggerating on a mere  typo.

Trump subsequently deleted the tweet an hour after posting it, and replaced it with one correctly using the word ‘unprecedented’ instead of ‘unpresidented’.

Look at some of the retorts made by netizens in the gallery.