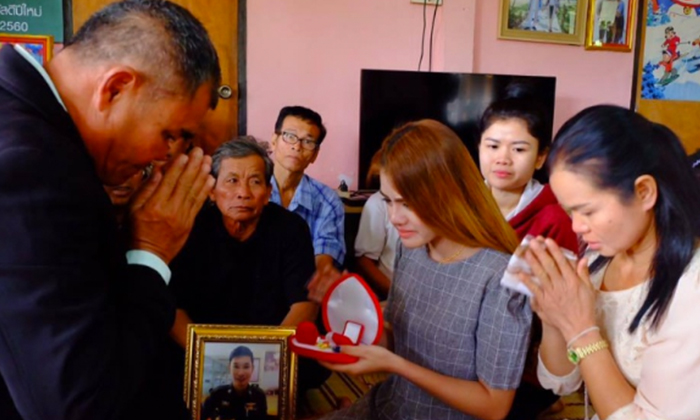 A Thai woman, Chun, decided to proceed with her engagement to her boyfriend last Sunday (Dec 31) -- a date the two had decided on -- even after his death from an accident.

Chun's boyfriend, Long, a 25-year-old policeman, died in an accident on October 2016, while he was on the way to pick her up, reports World of Buzz.

Long fell from his motorcycle and sustained severe injuries, dying from organ damage the following day even after he was rushed to a hospital for treatment.

On the day of the engagement ceremony, Chun woke up early to prepare for it, dolling up herself even though her boyfriend could no longer be there.

When a guest asked why Chun insisted on going through with the engagement, Chun replied that she wanted to honour the promise they had made, murmuring to herself:

“On December 31, our engagement is formalised.

“We used to think that on this day, we would follow Thai tradition, dressed up in traditional outfit, kneel in front of our parents as gratitude for bringing us up.

“You are now in another dimension, but it doesn’t matter.

“My love for you goes beyond that.

“Whether you’re here or afterlife, I would still marry you.

“I love you forever and will never give up on you.

“We still have a long way to go, do you hear me?

“Today is the most important date of our lives.

“Rich or poor, sweet or bitter, I would hold your hands and complete this journey together.”

If this isn’t the definition of true love, what is?

Related Stories
Guy pursues girl for two years despite knowing she has cancer -- and their texts will rip your heart out
Unlikely lovers? Check out this love story between American teacher and Chinese farmer
Girl's parents have been married for 27 years -- and their love story will tug at your heartstrings
love story
touching
tragic
lovers
Thai GF gets engaged to dead BF