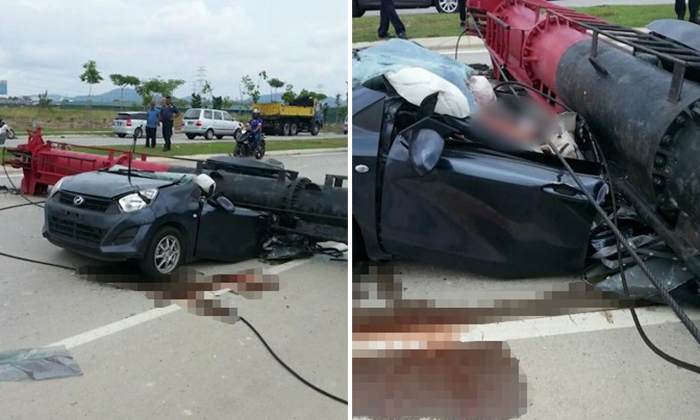 A married couple were killed in a tragic accident after a piledriver in Malaysia collapsed and hit the car they were in.

Abd Rahim Abd Rahman, 51, and his wife Nurhayati Rosli, 46, from Indonesia, were travelling in their Perodua Axia vehicle when the freak incident took place on Persiaran Astana in Meru near here at approximately 12.30pm.

According to their 31-year-old son-in-law Adik Cendera Shahril, the couple, who live in Setapak, had just made a delivery to a kiosk they own at the food court of a hypermaket in Setia Alam.

''They own two food kiosks in Kuala Lumpur and Setia Alam, and it is their daily routine to deliver goods there, said Adik Cendera, adding that his wife helped out at the Setia Alam kiosk.

"They had just left (Setia Alam) and were on their way to perform Friday prayers at the mosque in Bandar Bukit Raja when the accident happened,'' he said when met the Hospital Tengku Ampuan Rahimah mortuary here Friday.

The piledriver, which was being used on a construction site to their right, fell directly onto their vehicle, killing them instantly, reports The Star.

The couple have no children together.

Selangor Fire and Rescue Department assistant director (operations) Mohd Sani Harul said that the victims' remains have been sent to the Hospital Tengku Ampuan Rahimah here for a post-mortem.

Firemen from the Selangor Fire and Rescue Services Department were despatched to clear the scene.