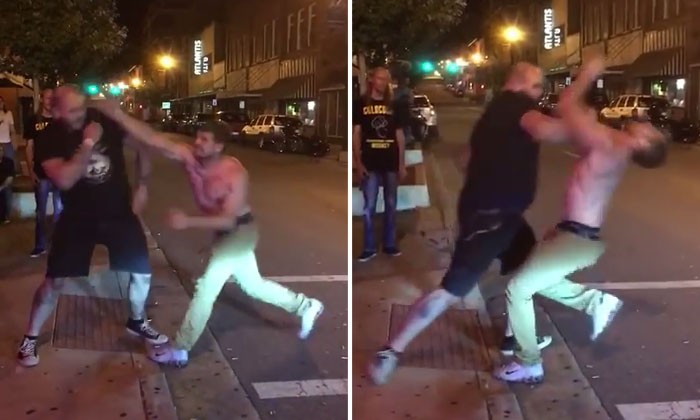 A drunk dude in Tennessee, USA, got more than he bargained for when he tried to pick a fight with a guy.

A video of the incident first shows the drunk, topless individual approaching a man around twice his size.

The cocky dude then started taunting the burly man and tried to aim a punch at him. His opponent dodged the punch and then jabbed him in the face.

One hit was all it took to knock the poor man out.

As it turns out, the burly dude is a bouncer who happens to be an MMA athlete as well.

According to The Daily Mail, he has been identified as John Hernholm, an MMA fighter with a 5-0 amateur record.

Hernholm went on to pin his attacker to the ground thereafter.

If the latter did not know the meaning of 'don't hunt what you can't kill', he sure does now.

Related Stories
Boy beats up classmate in Sabah after he gets teased about late father -- and even uses chair to bash him
3 years after being brutally beaten up by neighbour, elderly woman still suffers sleepless nights
fight
funny
mma
drunk