Cleaner mocked for staring at gold chains in jewellery store: 'This man only deserves to look at rubbish' 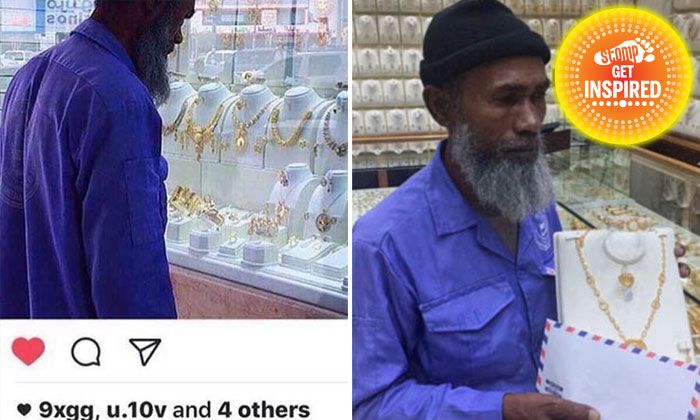 A Bangladeshi cleaner in Saudi Arabia was literally struck with gold after a photo of him staring into a jewellery store was ridiculed and went viral.

Nazer al-Islam Abdul Karim, 65, was mocked by an Instagram user who shared the photo with the caption: "This man deserves to only look at rubbish," reported The Daily Mail.

One might think that he probably got mocked really badly after the picture was posted, but what happened was the exact opposite. The post triggered a huge outpouring of support from the Saudi online community for Mr Nazer, who works in Riyadh and earns about 700 Saudi Riyal (S$269) a month.

"Peace and blessings upon you all, I urge those who know this worker to get in touch with me. I have a free set of gold jewellery for him."

Not only was the tweet shared over 6,000 times, but according to CNN, the cleaner was also identified three hours later with help from the netizens.

Netizens then began sending gifts to Mr Nazer, including a gold necklace similar to the one he had been eyeing previously.

On top of that, Mr Nazer was also sent bags of rice and honey, return tickets to his home country and two mobile phones -- namely an iPhone 7 and a Samsung Galaxy.

What is funny is that Mr Nazer did not even realise that the photo was taken, yet alone circulating.

'I was just doing my job as a cleaner in the municipality and found myself in front of the gold shop. I am very happy about the gifts and very thankful,' he told CNN.

Once Mr Nazer was found, an executive at a Saudi sports channel posted videos of him choosing a gold set, as well as photos of the cleaner with his new gifts via Snapchat.

Al-Qahtani told CNN that he was impressed by the efforts made to locate the cleaner and by the kindness and generosity of those who reached out to help him.'