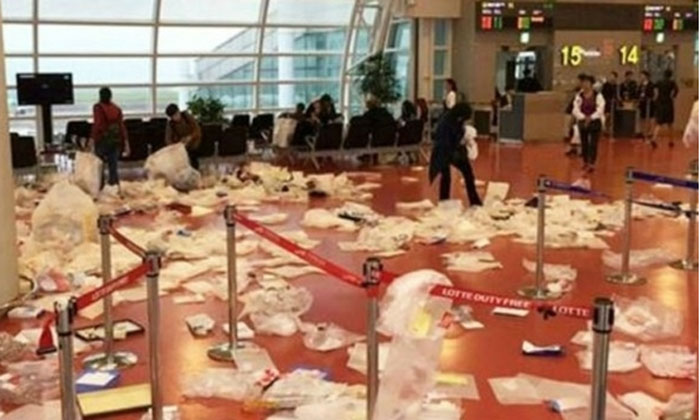 South Korea's resort island, Jeju has been a magnet for tourists but tensions have risen between Chinese tourists and Korean locals.

Last week, a photo surfaced online of what Chinese tourists had done to the airport departure hall in Jeju.

In the image, the floor was completely covered with wrapping paper and packaging left over from the tourists' duty-free purchases.

When tourists purchase duty-free items from outside the airport, they are delivered to the airport's departure gate before the traveller's fly home, reports Shanghaiist.

All goods are properly packaged but in order to maximise their convenience, the tourists ripped  the packaging from the goods before boarding their flight home.

According to local media, duty-free staff had requested that the tourists throw their trash in the bin, even distributing garbage bags to them.

An airport spokesperson said in a statement:

"Even though there is still lots of rubbish left after they depart, fewer of them are dumping it on the floor after we've taken action, those who keep throwing waste on the floor might face fines as a penalty in the future."