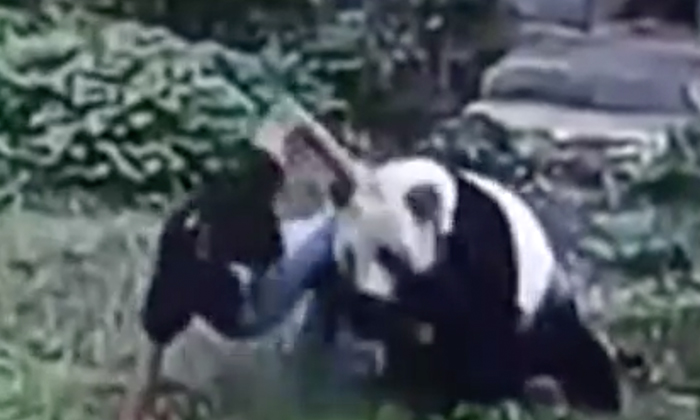 A Chinese man was attacked by a giant panda after prodding the bear in Nanchang Zoo, Jiangxi Province, China.

CCTV footage showed that upon jumping into the pen, the man started making gestures, supposedly at his female friends outside the enclosure.

He subsequently walked over to the sleeping panda, attempting to get its attention by tapping on its head.

While initially unresponsive, the giant suddenly woke up and went Kung Fu Panda on him; grabbing the man’s leg and refusing to let go.

The guy, who clearly had no martial arts training, was no match for the prowess of the panda.

He fell to the ground and the pair were embroiled in a scuffle as the man tried to shove the panda off, but to no avail.

Fortunately, after a struggle that lasted about five minutes, the intruder finally broke free and fled from the enclosure unharmed, according to stuff.

7 Facts about the lovable panda (courtesy of National Geographic)

1. The giant panda is a solitary animal, which spends about two-thirds of its day feeding and the remainder resting.

2. Although classed as a flesh-eater, the giant panda feeds almost exclusively on the stems, leaves and fresh young shoots of bamboo.

3. The extra digit on the panda's hand helps them to tear the bamboo and their gut is covered with a thick layer of mucus to protect against splinters.

4. The giant panda has the largest molar teeth of any carnivore. Their lower jaw has an extra molar; their molar and pre-molar teeth are adapted to slice and crush tough plants stems.  Their strong jaws are capable of crushing bamboo stems up to 4cm in diameter.

5. They may appear sedentary, but they are skilled tree-climbers and efficient swimmers. Pandas can takes refuge in the nearest tree when in danger from predators such as brown bears, leopards, or wild dogs. Its paws are broad with long retractile claws and furry undersides which help it grip when climbing.

6. Pandas have a highly developed sense of smell that males use to avoid each other and to find females for mating in the spring.

7.The giant panda does not hibernate but it will shelter in caves or hollow trees in very cold weather.