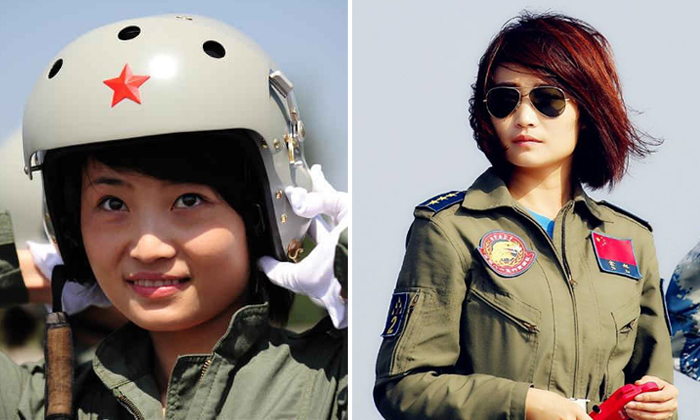 An elite female fighter pilot has been hailed ;a 'revolutionary martyr' by China's air force after she was killed during a flight training accident earlier this month.

According to Shanghaiist, Yu Xu was born in Chongzhou, Sichuan province in 1986.

Her career started in 2005, when she enrolled in the Air Force Aviation University and joined the People's Liberation Army.

Upon graduation, Yu made her debut flight during a massive military parade that marked the 60th anniversary of the founding of the People's Republic of China.

She proved to be even more outstanding after joining the elite aerobatic team known as the August 1st Air Demonstration Team, and becoming the first female pilot to fly the China-made J-10 fighter.

On Nov 12, Yu was piloting a J-10 during routine flight training in Hebei province when her plane collided with another J-10, causing her jet to plummet to the ground.

While her co-pilot was able to eject in time, Yu was less fortunate.

The loss of the talented pilot has been deeply mourned by her country, fellow air force members and netizens, with many calling her a hero as well as an inspiration.

The Chinese air force has also officially designated Yu as a 'revolutionary martyr'.

Related Stories
10 beautiful people spotted in Singapore who have stolen our hearts
Before 'chio' bridal boutique owner was boss, she was once the face of M1
Pretty Vietnamese girl looking for local guy who impressed her at Clarke Quay: 'I don't want any regrets'
death
dead
accident
China
beauty
Chinese pilot dies