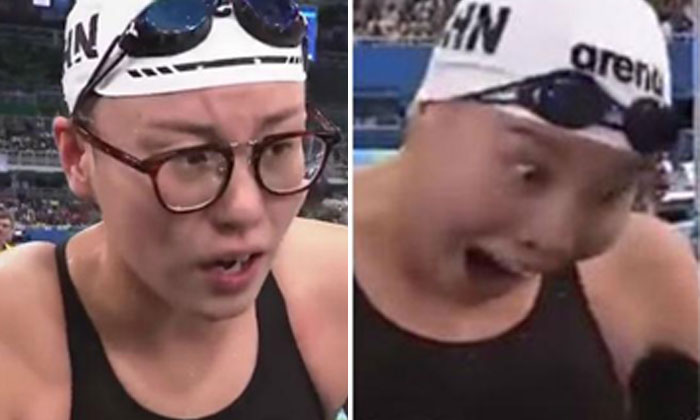 The Chinese swimmer who raced into everyone's hearts with her adorably candid expressions and true-to-self quotes has once again, impressed netizens and international media with her unique honesty.

This time, backstroke specialist Fu Yuanhui broke an unspoken sporting taboo by telling the world that she had competed while having her period.

In a video interview with China's CCTV, Fu said that she felt responsible for her team's loss in the Rio Olympics 4x100m medley relay as she had been feeling discomfort due to her period.

The interview on Aug 14 showed Fu crouching in pain before a team mate helped her up to be interviewed.

When asked if her stomach was hurting, the 20-year-old explained that she had gotten her period the day before.

"My period came last night and I'm really tired right now. But this isn't an excuse, I still did not swim as well as I should have," she said.

Her forthrightness surprised many, especially since it is uncommon for sportswomen to speak openly about their menstrual woes.

In January last year, British tennis player Heather Watson raised eyebrows when she told the media that she was experiencing 'girl things' at the Australian Open.

While menstrual periods are a fact of life for women, the subject is considered taboo in the sporting world, partly because many sportswomen want to avoid looking like they are giving excuses for performing below expectations.

Fu's unabashed admission was lauded by netizens and international media, with many acknowledging that it was difficult for sportswomen to juggle the discomforts of period pain and intense competitions.

"Wow she still has to swim when she's on her period? This is heartbreaking," one Weibo user said.